The genders of all of my children were, technically speaking, delivery surprises. At the beginning of any ultrasound session where this information could possibly be leaked, I made the desire for ignorance plain: we simply didn’t want to know. In the UK, where scans are few and far between and there is no right to be informed of your baby’s sex in utero, keeping this kind of secret isn’t particularly difficult.

At my first 20 week scan, the doctor was considerate. Look away now, he warned, as the wand made its way down to what he called the ‘nether regions’. We must have been in some kind of trance-like state by that point, though, because all eyes remained fixed on the screen. Nobody said a word. In retrospect, the penis was as clear as day. It was a view from under the legs and dangling between them was, well, there was definitely something, grainy and shapeless though it might have been. As we left the hospital, I ventured to my husband: did you see it? Ever ambitious, he responded: the uterus? I think so.

When baby number one was held high to me, huge and dazzling under the lights of the operating theatre, I saw for certain that he was a boy and I was thrilled. Oh how I had wanted one. Ever a tomboy myself, there was a part of me that was genuinely frightened of having a girl, of things pink and frilly and soft, things that send most women into fits of ecstasy. My husband, on the other hand, felt the opposite and so we struck the following deal of consolation: boy, his last name; girl, mine. Making the loser on the gender front a winner on the lineage one. Tomkins it was, but I didn’t care as I cradled my first born son, feeling a pride like something out of the Bible.

Two years later, we sat again in the exact same room with the exact same doctor and a lesson learned. This time when he said to look away, I actually did. The sex of the second baby is, in many ways, more determinative of the family dynamic than that of the first. If you get a repeat, you are statistically much more likely to have children all of the same gender. Partly because many couples stop at two kids and partly because there is research to suggest that once you have two of the same sex there is a high chance - though not as high as anecdotal evidence seems to suggest - that the next child (if born to the same parents) will be of that sex as well. When baby number two found its way out of me and the ‘it’ was shown to be a ‘he’, I was happy again. So too I was convinced that I would forever be a mother of boys.

Most people, whether they admit it or not, have strong feelings about the sex of their unborn child, particularly a second child. The disappointment that comes when the ‘wrong’ sex is revealed is a real and hard thing. Of course we all want healthy babies, boy or girl, of course. But the difference between sons and daughters is not a frivolous one. How could it be when the experience of raising them mirrors the great divide between males and females themselves? Not when they are tiny per se, when the only marker of that difference is the color of the swaddle or the print on the sleepsuit. But increasingly so as they grow and grow up. A house of young sons, dominated by Star Wars and superheroes and Puke in a Pot, feels remarkably distinct from a house of similarly-aged daughters.

I’m a surprise addict in any circumstance, but when I chose to keep the sex of my first baby unknown until birth there was an ulterior motive at work. I cared about the gender of this baby deeply, more, I imagine, than I even allowed myself to acknowledge at the time. To be sure, the revelation of gender is always a surprise, whether it happens at 16 weeks of gestation or day one of life. But not all surprises are created equal and not all scenes of unveiling have the same emotional impact. Countless, and I mean countless, women write into the forums on this topic with the same story: unwanted sex determined in utero, fell in love with the baby as soon as it was born. The only hard part was the space in between. My feeling was that if you eliminated this space, if you conflated the incomparably spectacular moment of meeting your baby for the first time with the moment of finding out what kind of baby it is, the odds of true disappointment would fade away.

When I became pregnant for the third time, I wasn’t going for the girl: I wanted a bigger family, not a more ‘balanced’ one. In fact, I expected another boy. When I found out it was twins, however, something changed in me. The expectation that there were two more boys on the way continued afloat, but I also allowed myself to contemplate the possibility of the fairer sex. Maybe because the idea of four boys was overwhelming. Or maybe because there was a desire for boy/girl twins which was separate from a desire for a girl full stop.

Or maybe it was because at some point I became pretty sure that baby A was a girl. Not because one of the sonographers had slipped and not because it had been divined by a wedding ring or Chinese calendar. Rather, because there were just so many ultrasounds. After two kids and too much time on the internet, I knew well by this stage the difference between the ‘turtle’ and the ‘hamburger‘ and you can only avert your eyes for so long. Baby B had something lurking between his legs, but baby A, repeatedly, did not. I say I was ‘pretty sure’ but it was never confirmed and I never spoke it out loud for fear that I was wrong.

They pulled her out first and I cried with joy and with relief. Because I finally had a daughter? I don’t know. Has it been different? A little. She screams higher and louder than the others. She is more melodramatic. She tends to her dolls with an interest and tenderness none of the others have shown. She wears dresses, sometimes, and I do her hair when I can catch her. At 21 months, this is as far as our mother-daughter relationship has evolved. The real differences will come, no doubt, with time, as she inches closer to becoming a woman herself: her first period, her first boyfriend, her first baby. For now, though, I am glad that she is one girl among three boys and that her femininity will always be balanced in this way by a bevy of brothers. There’s only so much pink I can handle. 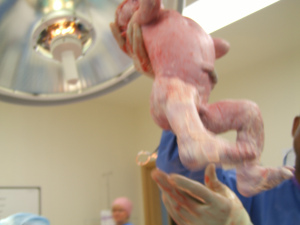 it’s a boy! the delivery of my third son, a minute after his sister

Tagged as delivery surprise, finding out the sex of your baby, gender disappointment