Dear Mom of the Kid My Kid Hit at Playgroup,

It wasn’t that hard, it really wasn’t. Sure, she was screaming like a banshee, but with a 14-month-old volume can be a red herring, can’t it? There are other things to consider, if the eye is trained. I’m kind of like the Mommy CSI that way. Show me the aftermath of a child-induced crime scene and I’ll tell you what happened. Or, at least, I’ll tell you how bad it was.

This ‘incident’, as you describe it, it’s a minor misdemeanor at best. No obvious signs of concussion, no instant bruising, no blood. In fact, I see no trace of my son’s hand whatsoever and, make no mistake, I’d recognize those fingerprints anywhere: they cover my windows.

But, let’s be honest, it’s the hair that gives her away.

Do you notice how it’s perfectly in place, even though you claim he ‘hit’ her on the head (yes, I know that’s where the brain is located and, in turn, her chances for a place at Oxford)? What’s more: do you notice how the clip is still there, the one that’s holding only three strands of hair (yes, I can tell she’s a girl)? Gil Grissom and I concur it would’ve at least come loose had he actually clobbered her. When my daughter gets into a scrape, it’s as if she’s been in a wind tunnel.

You saw the whole thing, you were standing right there? Well, I saw it too. It might have looked like I was having a coffee and reading People magazine and checking Facebook, but my peripheral vision is excellent. My two older kids are pretty convinced I have eyes in the back of my head. Don’t make that face, I was only aiming to strain the global population with one child more than the national average. This little bruiser, he’s a twin.

Oh, you didn’t realize that the other one I was intermittently stuffing full of crisps is the exact same height as him? Gosh no, they’re not just ridiculously close in age. Who do you think I am? Britney Spears? I was indeed as big as house, if you must know, and boy/girl twins can’t be identical…I’m positive. It’s hard, I’ll give you that, but there are benefits too. They are very socially advanced, for instance. That’s how this guy honed his skills, after all, the constant presence of a sparring partner. He and his sister learned to snatch toys and bite while nobody’s looking and holler ‘it’s mine’ well before the average singleton.

That’s pity in your eyes, isn’t it? Don’t feel bad for me: I’ve been you before. Believe it or not, my first child was also the angel of the playgroup. He never raised his hand to another kid, not once. If anything, he was the innocent victim like your sweet princess here: too perfect to even fight back, that boy of mine. (I should mention, for the sake of full disclosure, that he now beats the crap out of his brother on a regular basis).

Once, I’ll never forget it, I watched from the other side of the room (what was I doing so far away?) as the resident thug swiped him on the cheek. It was like a horror show unfolding…In. Slow. Motion. I’m sure you can relate. I couldn’t get to him in time, Lord knows I tried, tripping over toys as I crashed my way across the floor to intervene. Oh the carnage. I had to put anti-bacterial ointment on the cut and everything. The other mom, my goodness, she couldn’t even get her son to apologize. Though, to be fair, I’m not sure he could talk yet.

And you want to know the worst part? She hadn’t trimmed his nails. Count your lucky stars I believe in good personal hygiene.

The Mom of the Kid Who Hit Yours

P.S. I probably should have started with ‘I’m sorry’. 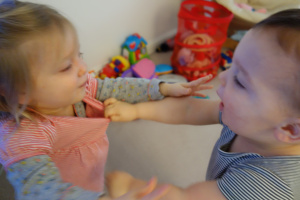 Tagged as dealing with other parents, kids hitting, playgroup, twins