Oh, Scandal. It was an innocent recommendation from friends, two seasons of DVDs bought, and then three weeks of my life lost to your intrigue. And that was only the screen time. How much longer have you rattled around the rooms of my mind? How many times have I replayed in my head that heart-stopping scene on the campaign bus, her fingers laced through his, the one in the Rose Garden: “You own me…You own me!”? Obsessions aren’t healthy, but they can teach us things. About ourselves, about the world. What better way to justify the hours spent neglecting my children for this TV show than to convince myself it encapsulates the most profound of life lessons for them?

Okay, kids, you are nowhere near old enough to watch this gem yourselves, but let me distill its wisdom for you in five fell swoops.

1. Trust your gut, even though it won’t always be right.

Olivia Pope might be the most fascinating heroine to grace our screens since the age of the box set began. Forget her impossible beauty. Forget her impeccable wardrobe. It is her confidence that makes her a true cut above, tinged though it is with a certain President-related vulnerability. She has an enviable capacity to see straight to the heart of the matter, to read people, to read the situation. They don’t call her a “fixer” for nothing. The key to her success, so we learn in the very first episode, is her famed “gut.” Her instinct. It’s never wrong. Until, of course, it is. Fitz kind of did sleep with Amanda Tanner after all, however unclear we are about the “position.” Never mind, time to suit up for episode two.

2. Sacrifices in life are inevitable.

Some would call him a font of cynicism. Some a master of realpolitik. Either way, Cyrus Beene sees the dirty truths underlying the working of politics and, on occasion, the world itself. He’s not a terribly likeable character - especially when “off his leash” - but every now and again he hits the nail on the head. Hard. Case in point: the season one finale. Olivia is walking out of the Oval Office, a smile light on her lips at the flicker of a possibility that she and Fitz might have a normal life together. But there’s Cyrus lying in wait, the bubble hovering in the air between them, about to be popped. “Some men aren’t meant to be happy,” he tells her, “they are meant to be great.” Most people, in other words, can’t have everything they want, at least not at the same time. Sacrifices are inescapable; jam-making has to wait.

Scandal is one grey moment after the next. Each of the characters is flawed in his or her own special way. All have made highly questionable decisions at one point or another: lying, adultery, theft, election rigging, torture and a pinch of murder thrown in for good measure. This is not the most upstanding group, morally speaking, and yet, and yet. Life is a tangly business and people get stuck in its brambles (a few get thrown in the “hole”). Sometimes you can do the wrong thing for the right reason (Olivia perverting the course of justice to save Quinn’s ass). Sometimes you can do the wrong thing plain and simple (the President, the Supreme Court Justice, the hospital room). “You did what you thought was best at the time, even if it was wrong,” Olivia says to Sarah Stanner, swilling $300 red wine straight from the bottle. “You can’t change the choice you made, all you can do is not let it ruin you.”

The biggest question this show raises is why, collectively, we are so captivated by the trajectory of doomed love. It’s not a new question, to be sure: the great art of the world has been asking it since time immemorial (shout out to Romeo and Juliet here). “I don’t want normal and easy and simple,” Olivia says to Edison, who is exactly the normal, easy and simple option for her. “I want painful, difficult, devastating, life-changing, extraordinary love.” Edison, oh naive little Edison, thinks love is not supposed to hurt. But the truth of the matter is that the best love, the kind where you expose yourself completely, often does. And this is why we are, most of us, cheering for the mistress.

One of the things Scandal does best is to let time stand still. It is a slick and fast-paced drama, catapulted forward by camera-clicking scene changes, shifting time frames and lightening quick repartee. But the writers and producers sure know how to linger when they need to. And they know how catching your breath for a minute, having each second of it tick-tock heavily by, can leave you breathless in the best possible way (and I’m not even talking about the sex scenes!). “Stand here with me for one minute,” Fitz says to Olivia, in the first flush of their relationship. “One minute,” he pleads, two years later, a silent embrace on the couch of her apartment. These moments are about respite from difficulty and discomfort. But they are also about the beauty of slowing down enough to cherish what is in your arms right now. (Because who knows when these two will be in the same room again). 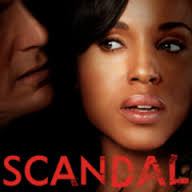