When he was three years old, my son Oliver used to dress up as a fairy. On a regular basis. Some of his closest friends were girls and there was always an encouraged exchange of costumes between them, dressing up being a - perhaps the - staple activity of any playdate in the fourth year of life. Sometimes he would complement the frills and wings with an electric guitar or light saber. Sometimes not. Sometimes he would forgo Tinkerbell altogether in favor of Batman or Darth Vader or any of the myriad of other male superheroes we had piled up in the toy box.

Oliver was a sensitive and cautious toddler. He could concentrate on quiet tasks for long periods of time, he could sit calmly in a restaurant armed only with crayons and a piece of paper. He didn’t have the need to run wild or the tendency to break things. He never, not once, expressed a desire to drive a digger. So too it was clear from an early age that he was emotionally astute and empathetic.

You can see where I am going with this. Some kids come out of the womb screaming their gender. Others are born with only an outward manifestation of sex, and the gender develops later, slowly, and perhaps not so overtly. Oliver had many typically ‘feminine’ traits as a small child and while I never thought he was a ‘pink boy‘ per se, I liked the fact that he wasn’t a dark blue one either.

Fast forward four years. Oliver comes home from school now with very definitive views about what is ‘for boys’ and what is ‘for girls’, all of which are drawn along conventional gender lines and all of which drive me crazy. Pink is for girls, says the boy who begged for a purple iridescent button-down shirt on his fourth birthday. Dance classes are for girls, says the boy who spent month after month moonwalking around the room to the sound of Michael Jackson’s falsetto. Barbies are for girls, he says, and to be fair we don’t have any Barbies. No they aren’t, I tell him just the same, but his face is utter disbelief. And what about Ken, I want to know, a question which is met with stunned silence.

These changes in him make me wonder whether a flexible idea of gender is something you age out of. As babies we are pure and open-minded in this regard, untouched by the stereotypes that run rampant in society. But after a certain amount of time the reality closes in and there seems to be very little we can do about it as parents. How long does the process take? Seven years? Many of Oliver’s recent outbursts on this topic are in response to his five-year-old brother, who is, you’ll have to trust me, far more innately ‘macho’ and testosterone-fuelled than Oliver himself. Leo still likes pink, though, and New Direction too. In fact, his best friend is a girl and he sees no problem here. Not yet.

Part of the reason I bristle against Oliver’s newfound attitude is because I want to think he wasn’t raised like that. I consider myself to be fairly progressive on this front, but if I am honest there is so much conservatism to which I must plead guilty. I wasn’t the parent who refused her two-year-old son the cotton-candy colored kitchen he pined for, but I wasn’t necessarily a ground-breaker either. Leo got a baby and a dollhouse for his second birthday and I remember feeling proud in the face of my non-conformist gift choices. But the baby was a boy, ‘Max’ , clad head-to-toe in powder blue, and the house was chosen for its array of primary - not pastel - colors. Unlike that Canadian child named ‘Storm’, I have never disguised my kids’ genders. Their clothes have always been bought from the rack of the sex they actually are. The boys’ hair has been kept short, the girl’s hair has been grown long.

Oliver and Leo both spent their early years in a house of only male children. But my boy/girl twins have not, which makes them the offspring who have been exposed to the most naturally-occurring gender fluidity. These are the kids who actually wear each other’s clothes and who use, on a daily basis, each other’s gender-themed crockery. Often this is for practicality’s sake. There are other times, though, when I do it on purpose. I give the purple butterfly sippy-cup to Jasper and the green truck one to Phoebe and, oh I know, I know, it’s so liberal you can hardly stand it.

From the word go these two have been exposed to the same collection of toys and there is certainly a noteworthy crossover because of it. Jasper makes cups of ‘tea’ every now and again, lovingly steeped and sugared, while Phoebe might rev a race-car across the kitchen floor. And yet, as ever with twins, their large-scale behavior proves that much of personality - including gender - comes pre-determined. Jasper undeniably gravitates towards electronics and ball games, while Phoebe tends to her dolls with an interest and tenderness that none of the others have shown. She feeds them and changes their diapers and wipes clean their faces in a way and from an age at which it makes it hard not to believe that, for some girls, maternal-ness is hardwired.

The potentially negative consequences of early gender stereotyping seem to be different between the sexes. Oliver claims that girls can play football or Star Wars, but that boys cannot collect Sylvanian Families or take ballet (you can bet ‘Billy Elliot’ is on our playlist). The fear with our sons, in other words, is that they will be too effeminate and mocked for it. The concern with our daughters is something else. We don’t tend to worry, unless it is an extreme case, if they are tomboys. We worry, rather, that they are going to feel somehow restricted in their opportunities because of the fact that they are not boys.

My stomach lurches at the prospect that one day in the not-so-distant future I will have to walk down the street holding hands with a daughter who is sparkling and fully bedecked as a princess. But I can live with the fact that she wants to be a princess at three if I am sure that she knows she can be a doctor, or anything else for that matter, by thirty-three. 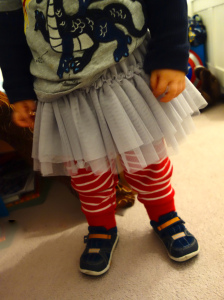