Last week, LeanIn.Org, the organization founded by Sheryl Sandberg (of Facebook and Lean In fame), teamed up with the Girl Scouts to launch a national public service campaign to stop girls from being called ‘bossy’ in an effort to encourage them to lead. #banbossy has been controversial, to say the least. Debra Cole and I are debating the merits of it here, at Brain, Child Magazine.

Deb writes: ‘The purpose of the campaign is to “encourage leadership and achievement in girls,” not inspire them to be obnoxious.’

What do you think? 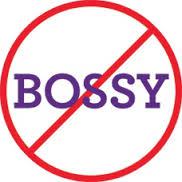