A few days after his second birthday, my third son cupped my face in his pudgy hands and said: ‘I love you, Mommy’. Out of the blue. It was adorable and sounded more like ‘I yuv dew’ and was accompanied by a hug the fervor of which none of my other children can replicate. It was also a milestone: the first time he had uttered those three little words spontaneously, though they have been afloat in our house since the day he was born.

He obviously learned it from me, this phrase, from a near-constant airing of the sentiment. But the truth of the matter is that I don’t think I actually loved him until he was 20 months old. I don’t say that in an alarming, call-social-services kind of way, though I realize it might sound harsh enough to send some of you running to the phone directory. Rather, the length of time is more a reflection of my idea of what the word ‘love’ means when it is unrequited. Babies are in a category unto themselves in this respect: the issue is not that they don’t love you, it is that they can’t. Not yet, at least.

Loving a baby is always a one-way street. I fell in love with my first son instantly, despite the fact that he didn’t love me back. In hindsight, however, I see that this love - indeed almost the entirety of our relationship - was based on something I would now equate with a suspension of disbelief. So too it was based on the emotionally convenient conflation of love and need. He needed me uniquely, therefore I believed that he loved me and that he loved me uniquely to boot. It was a magnificent feeling and it made his babyhood shine brightly for me in a way I have not been able to recapture subsequently.

For when my second son was born it was as if the penny had dropped. I couldn’t pretend anymore that a gummy smile in my direction was a window into his soul or that the twirling of my hair while he nursed was an offering of his heart. These things were no longer signs to me of a special connection between us, the way they were with my first son. Instead, they became all of a sudden what they more objectively are: the normal reactions babies have that are not really contingent on who they have them with.

It’s like any stage of development that is forced: when it finally happens organically, you see that what went before was only a chimera. Try as hard as you like to make your kid walk - hold his hands, drag him around the room, prop him against a trolley - but until he is actually ready to take those first steps on his own they will remain elusive. Emotions are the same. I treated my first baby as if he had a social capacity well beyond his cognitive age. This trick of perspective worked wonders for us: it got us through the days, the very long days alone, far more happily than if I had accepted I was talking mainly to myself. But once he had grown into a toddler who possessed the true ability to interact meaningfully, I couldn’t get back to the place where I didn’t know what it looked like for real.

This points to one of the abiding fears of second-time expectant mothers: how will I ever love the new baby as much as I love the first? The answer here is that you will, that love in this context is an incredibly expansive and flexible thing. But to the question ‘How will I ever love them the same?’, the answer is mostly likely that you won’t. One of the hardest things about parenthood is figuring out how to be a different parent to different children and embracing the reality that you will feel different feelings, at different ages, about them too.

I went through the motions of love with my second child, to be sure, the kisses and the small tendernesses, the right words whispered in the dark. There were feelings of warmth and happiness. There were protective instincts. One could argue that this is love when it comes to a baby. For me, though, it was as if we were living in the shell of a house but without any furnishings. Then slowly, slowly through the first year of his life we began to decorate it together and by 14 months the rooms became beautiful. 14 months. He was running, he was talking, he was winning the world over with his impish grin. He was sleeping past 5:30am. I ‘knew’ him then and I discovered that knowing is, for me, a prerequisite to loving.

I can’t articulate exactly why I call what I finally experienced at that moment ‘love’, but not what preceded it. Or why it took 20 months for me to look at my twins with the same sense of belonging and heart-wrenching adoration that I feel when I look at their older brothers. Like the famous definition of obscenity, all I can say is that I know what love is for me when I see it. And that it doesn’t always come quickly. Quite the opposite: sometimes the conditions are just too rocky for it to bloom straightaway.

Maybe I am not so different from my two year old. He will be saying ‘I love you’ now for months, years even, before he understands what those three little words actually mean (he told the hoover he loved it yesterday, after all). It will take time for him to learn how to match the language of love with the emotions that fuel it. Just as it did for me. 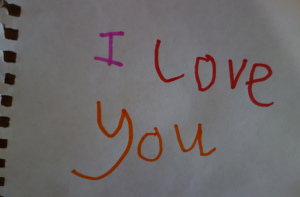