It’s the first thing I see when I log onto Facebook: “5 years ago today.” There he is, my oldest son, now all long limbs and tween angst, looking cherubic on his first day of school. He’s smiling for the camera. I remember it well: smoothing his hair down, bursting with pride. And though I know the timescale to be accurate, I’m still taken aback by it. Five years ago? Five years that have whipped by me like scraps of paper in a westerly wind.

I remember my son’s first day of school, but what I remember most about that day, which Facebook prompted me unexpectedly to revisit, is what’s not in the picture. It is lying on the obstetrician’s table hours after I sent my firstborn on his maiden voyage through the school gates, craning my neck to get a better view of the ultrasound screen. There was the sound of a second baby’s heartbeat and the sensation of stumbling out of the doctor’s office, numb with the realization that I would be moving from two children to four.

The tag-team effect of those two moments made August 11th, 2010 a remarkable day. But the truth is I hadn’t thought about either event in a good long while or considered, with the advantage of hindsight, the way in which they had entwined themselves in my mind. Not until Facebook jogged the memory for me. So I re-posted the picture, adding an updated caption about the discovery of my twin pregnancy, which was something, due to shock or superstition or both, I hadn’t gone public with at the time. Sharing the “memory” in my newsfeed felt a bit like reliving history. It also felt a bit like re-writing it.

You can read the rest of the essay here, at The Washington Post. 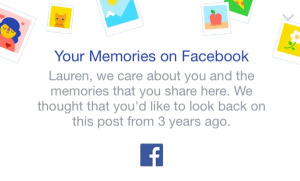 One response to “facebook ‘memories’ a double-edged sword for parents”