this is how i do it

The nanny is on holiday, my husband is out of town. It’s not necessarily a typical day - in our house, the schedule is different every day of the week - but the pieces of it all are. Inspired by the new Motherlode series ‘How I do it’.

6:36am. The first stirrings over the monitor. With four small kids, I very rarely wake up on my own. It’s always somebody, it seems, the question is rather: who?

6:58am. Today it is Phoebe. She’s calling for me now, whimpers mixed in with ‘Mommy!’s, and I wonder how long before crying of some description will not be among the first sounds I hear in the morning. I get her and take her back to bed with me. I am not ready to surface yet, everybody else is still sleeping. We cuddle and look at books and play ‘only child’ until she is quite certain she wants her breakfast.

7:24am. The boys are all awake now and downstairs, in various states of disarray. Oliver and Leo have a clock, a magic clock, the face of which moves from stars to a sun at the hour of my choosing. They are not supposed to come out of their room until it is glowing orange. It is set for 7:20am. It works wonders, even for the chronic early riser of the family (Leo).

8:20am. Ready to go. Our school is 25 minutes away. There is a local primary down the block, but we opted for a Jewish school further afield, because it is right for us in so many ways that make its location a non-issue. The ferrying to and fro is usually split among three people, which makes it palatable, but on days like today I feel every mile. I will spend close to two hours on the road; the babies will also. I’m about to start loading up when I realize, having made sure each of the kids is dressed, I have failed to dress myself!

8:35am. Travel time with them is good time, the conversations are fluid and interesting and uninhibited by eye-contact. This is when the hard questions get asked. This is when the ‘secrets’ ooze like ointment from a tube. Today it is nothing earth-shattering. There are demands for the tale of Babel again, because we are listening to Mumford and Sons (again), and I tell it, imperfectly, as we make our way across the Kingston Bridge, the twins pointing out the rushing water of the river below.

8:49am. We arrive at school. The big boys disembark. The babies stay in the car, a decision I imagine I am judged for eight different ways from the middle. Eight being the operative word: to bring them with us would require four clicks in and out of car seats, four clicks in and out of the stroller, 12 clicks altogether if you count the stiff, single one-side-at-a-time harness of our McLaren, which I still need because they are too young for me to safely manage them both on foot. It takes five to seven minutes to see Oliver and Leo through the main doors by themselves; it takes double that time, or more, to schlep Phoebe and Jasper. I leave them behind. They are happy enough.

9:30am. The weather is fine today, bright and dry, though the wind is biting. In Glasgow it is near criminal to stay inside on a morning without rain, a morning with bursts of sunshine to boot. At the end of May, I am still wearing my winter coat but we take a walk nonetheless, stopping by a friend’s house who is nice enough to entertain us with a novel collection of toys even though her own son is at nursery. None of my old friends - the friends whose children Oliver and Leo grew up with - have had a third baby. Which means I don’t have the network of same-aged playmates for the twins as I did for their older brothers. I miss it.

11:30am. Lunch and webcam session with my sister in Washington, D.C. The time difference is in our favor here: she is getting ready for work as I am making peanut butter and jelly sandwiches. It is such a relief to have the babies’ attention fixed on someone else for a while. They watch her put on cream and choose jewellery and I shovel food into my own mouth, slightly out of view.

12:45pm. To nap or not to nap? For Phoebe, the answer is yes. For Jasper, it is maybe. I have worked hard over the past two years, so hard, to ensure that they go down for a substantial nap in the middle of the day, in their cots and at the same time. As he approaches 27 months old, Jasper is showing signs of giving it up. I won’t fight with him today, he can doze in the car later. I put on the TV instead.

3:30pm. School pick-up. Leo starts to cry when he sees the twins, unused to the arrangement. Most days it is our nanny, Ashley, who collects them - this is when her shift starts - while I am home with Phoebe and Jasper. Apparently two toddlers are going to ruin his half-birthday dinner. Oliver is sulking because ‘we never do anything for my half birthday’.

4:45pm. Sitting down at Handmade Burger Company for the early bird special. The half-birthday celebration was supposed to be a cute idea when I noticed the date this morning. So too an incentive to brave taking all of the kids out for a meal, the first time I’ve done it alone. Also, I haven’t managed to go food shopping. Also, the previous evening was dire enough to make breaking bread in public with four people whose collective age is 17 actually seem appealing. 4:00-5:00pm is the witching hour in our house: blood-sugar levels teeter dangerously low. When Ashley is here, we tend to do a two-part dance: one of us does dinner, the other does damage control. Take away a dancer, however, and calls to 999 are made. Or so I found out yesterday when the emergency services phoned me back to check that everything was, in fact, okay despite a ‘silent call’ placed to their desk…with heavy breathing (Jasper).

6:13pm. Stop for milk on the way home from the restaurant. It feels like we are always running out of milk.

7:00pm. On the dot, the bedtime rituals begin. I tell the boys if they get into their pajamas, wash up and brush their teeth, they can come downstairs to watch part of a movie. Boring things first, fun things second, because who wants to do the boring things after the fun things? I put the twins to sleep now one at a time. After months in a room together, I have had to separate them again. They were driving each other - and me - crazy with the following give-and-take: Jasper roars loudly, ‘like a lion’, and Phoebe bursts into tears because ‘Jaspie is scaring me’! Repeat five, maybe six, times, for a total of 30-40 minutes a night over the course of a week and that was the end of that. Tonight, Jasper will have to wait with Oliver and Leo. I always do Phoebe first, of the two of them she is the sure thing.

8:21pm. Done. Nine bedtime stories read, seven songs sung (three of which were repeat versions of ‘Goodnight Sweetheart’). I can still hear footsteps above, a last minute toilet trip or book being re-shelved, but at least the lingering protestations from Jasper’s room have died out. I survey the damage of the day - the toys strewn on the floor, the dishes stacked in the sink - and move a few things around half-heartedly. Only a few.

10:05pm. My husband returns from London. I am already in bed, on the verge of sleep, beginning to dream about Monday, when our nanny comes back. 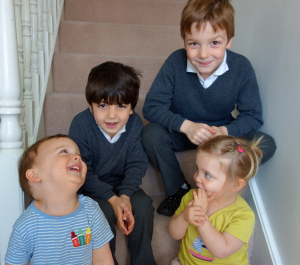 8:20am, ready for school: oliver has helped get jasper dressed and do phoebe’s hair!

Tagged as clock for kids, Daily schedule with kids, four kids, Motherlode, nanny on holiday, NYT How I Do It