We had a French family over for brunch one Sunday morning not too long ago. The father was a colleague of my husband’s, visiting Scotland from Paris on an academic stint. The children, a girl and a boy, were 10 and 7. Secretly, I was excited to see for myself what would happen at the table. The notion that French kids don’t throw their food, that their palates are broad and distinguished, that they hardly snack, is floating around almost everywhere in the parenting ether these days. Thanks to Pamela Druckerman’s wonderfully enlightening books on the subject, it is becoming something of a cliche.

True to form, the enfants joined us for a buffet of Serrano ham and assorted cheeses, goat and blue. They ate salad, they ate neatly and they perched politely at our under-sized table before returning to play by themselves in the next room. It was all a bit textbook, I have to admit. Equally textbook was what was transpiring on the other side of the kitchen. There, to round out the cultural divide, my two-year-old son had left his meal largely untouched. Instead, he was spitting milk methodically onto the tray of his highchair and licking it up. The slurping noises were hard to ignore. Our guests made a good show of not noticing.

Stereotypes are built up and then they are broken down just as quickly: my other two-year-old was sitting nicely in her highchair, doing essentially the toddler version of what the rest of us were. The twins are different in this respect. They were given the same food consistently since they started solids, but one of them has become pickier over time and one of them continues to eat everything. They were taught the same manners around the ‘table’, but one of them launches pasta like little rocket ships and one of them doesn’t. If the stereotypes are to be believed, one of them could have been brought up amidst the olive groves of Provence and the other in the heart of New York City. And yet, they both learned to eat in the selfsame kitchen in Glasgow.

My older sons follow a similar pattern, which means that I have two kids who eat widely and adventurously and two who are, let’s say, more circumspect. The reasons for this elude me. Having four children allows you to speculate wildly about determining factors. I can tell you, for instance, that the pair whom I dub the ‘good eaters’ - the ones who munch chargrilled squid and Tarka Daal and Caesar salad with gusto - are the fairer-haired of the lot. I can tell you that they are also the ones who sleep sounder, worry more and focus longer. I can tell you that, but I don’t seriously believe any of those things is responsible for the expanse of their taste buds.

So what is? This is the question I kept asking myself as I lapped up the chapter on global eating in Christine Gross-Loh’s illuminating book Parenting Without Borders. Gross-Loh discusses large-scale cultural differences in children’s food habits across several countries. The thrust is that not everyone eats as badly or as hyper-sensitively or as irreverently as Americans do. In France and Japan, for example, the kids partake in the same menu as the adults and there is a solemnity around the process of eating that is passed down from generation to generation. In places such as Sweden, children are given a lot of choice about what they eat and, consequently, make sensible ones.

I buy into the concept of a culturally acquired attitude toward food, to a degree. My cross-cultural children vary in the kinds of food they will eat happily and their willingness to try new things, but there is still a sense in which we have a shared relationship to the stuff. I’m just not sure how much it can be reduced to being American or being British. It feels, rather, more like an idiosyncratic mixture of personal influences, those practices from our pasts my husband and I have embraced and those we have rejected, mainly by instinct.

From my Jewish American roots comes the idea that food can be an expression of love and the binding agent of family celebrations; that ‘junk’ should be allowed in moderation so as not to cultivate excessive interest in it; that eating out is a pleasure, as is ordering in, and that there is no shame in not wanting to cook; that low blood sugar is serious business indeed. My husband’s family, on the other hand, is English and excessively mannered. We appreciate from them the idea that children should behave around the table, though we don’t allow formality to override enjoyment. Our kids relish my mother-in-law’s famous roast dinners and they like to don their aprons to help in its preparation. They snack a lot, which is an American phenomenon, but also a British one, where mid-morning (‘elevenses’) and mid-afternoon (‘tea time’) nibbles are a welcomed part of the schedule.

Our family’s eating habits, in other words, are a smorgasbord. The constant about them is that food both is and is not a big deal. We love it, we all love it. But we don’t stress about it. We have tendencies (bums on seats, plates to be cleared, the unfamiliar not snubbed outright, brown bread only, no artificial sweeteners), but they are not set in stone. The kids eat well on the whole (fish, vegetables, legumes, fruit, cheese), but they go to McDonald’s on occasion too (gasp!). There are times we sit properly at the table en famille; there are more when we eat quickly and separately, a means to an end. Dessert can be Reese’s peanut butter cups one night, yogurt and blueberries another. Yet another night it can be a bowl of cereal or a smoked salmon and cucumber sandwich. While individual days might not be perfect specimens of nutritiousness, the week usually balances out.

There are so many issues surrounding the raising of children that can drive a parent to distraction. In our house, food is not one of them. Some meals it is all about being fresh and home-cooked. Some meals it is ‘finish your pizza before you start your ice cream.’ We could be healthier, there is no doubt about that. But we could also have far more hang-ups about eating. The fact that we don’t is good enough for me. 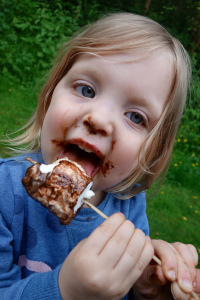 This post is part of a ‘blogging carnival’ about cultural attitudes toward food, inspired by the book Parenting Without Borders. Read the other participants’ thoughts at the links below: