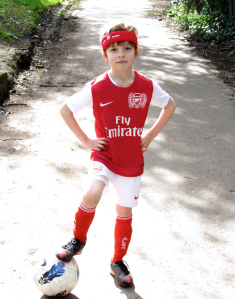 The baby isn’t cute. He is the cutest baby in the whole world. The toddler isn’t good. She is the best toddler on the planet. The second-grader isn’t smart. He is the smartest second-grader under the stratosphere. It’s high praise indeed – and a no doubt genuine reflection of the speaker’s individual perspective – but where does this language of excess leave the rest of our kids?

I often wonder why we feel the need to talk about our children in the superlative, a mode of speech that by its very nature relegates everything else in the same category to second fiddle. I know more people than I would care to admit who were forced, by an overzealous parent, to confirm that a given child was the most beautiful/adorable/amazing thing to grace the Earth. Ever. It wasn’t enough to acknowledge simply that he or she was lovely or good-natured or clever or any number of suitably laudatory traits. No, the praise literally had to include an element of peerlessness for it to pass muster.

Scan the comments on Facebook and you will see what I mean. It won’t take long to find a declaration that some unsuspecting kid is the best or the most of something or other. The deluge of ‘est’s makes sense. ‘Positives’ (‘my baby is cute’) often fail to capture adequately the right level of passion and ‘comparatives’ are too obviously mean-spirited. Nobody would post a picture with the caption: ‘my baby is cuter than yours’. Superlatives are safe because their target is much vaguer. Technically, you are saying that your baby is cuter than all babies everywhere, but because no direct comparator is named you can get away with it under a banner of general enthusiasm.

This tendency to exaggerate about the kids is interesting. In one sense, it is completely innocuous and understandable. We love our kids, we think they are extraordinary, we look at them with rose-tinted glasses (some of the time). Words are a powerful index of our feelings and we want the ones we use about them to reflect the pitch of those feelings as closely as possible. And yet, it is precisely because language is such a potent tool that we should make the effort to use it carefully. Over-egging the pudding, particularly in public forums, creates an unfortunate air of competition. There’s too much of that going around already.

What makes for a fascinating contrast is that we don’t describe ourselves or our own achievements in anything like this unrivaled way. In the adult world, there is room for more than one successful lawyer, attractive friend, loving aunt, happy couple or talented writer. We are competitive, to be sure, but we also seem able to celebrate each other without the oneupmanship and dripping hyperbole reserved for our offspring. If anything we are cautious, stingy even, with top-tier adjectives like ‘best’ and ‘most’. When they are wheeled out, they are the more meaningful for it.

One of the salient differences here is that grown-ups are objectively gauged all the time. For better or for worse, we know where we stand in the great scheme of things – in our jobs, in our relationships, in our mirrors – and there is usually evidence to back up the assessment. Most of us, who aren’t actually the best in the world at anything, can’t get away with claims to the contrary: we would be shot down in a heartbeat. Eyes would roll. Children, on the other hand, are spared from such exacting, literal, standards as they very well should be. This is liberating and maybe that’s just the point: for a short period of time, we can live with little creatures – little extensions of ourselves – who are deemed perfect simply because we say it is so.

I don’t know. Children seem to occupy a class of society where objectivity, privileged at almost every other turn, is all of a sudden un-welcomed. More than that: it’s actually frowned upon. A bias towards one’s own in this regard is not only expected, but actively encouraged. I get uncomfortable looks when I speak too honestly about my kids sometimes, about their flaws and foibles of which there are many (‘He’s quite bad at drawing’, ‘She’s a little obsessive compulsive’, ‘His head is huge’). I’ve seen other women get the looks too, those who dare to regard their newborns with the conclusion: ‘he’s…alright’.

The discomfort lies in the incongruity between the belief that there is something pristinely beautiful about children as a whole and the reality that not every child is a manifestation of every aspect of this beauty. I genuinely feel that all kids are adorable and interesting in their own ways. The true beauty, however, lies in the originality of each and this is exactly what is masked and missed by generic, superlative comments that put one child at the top of the pile at the expense of the others. I think my kids are pretty great most of the time, I’m their mother I kind of have to. But they certainly aren’t the cutest in the world or the smartest or the best behaved. And you won’t hear me saying otherwise.

Tagged as bragging about kids, cutest baby in the world, superlative adjectives