boys will be boys…or not

I have three boys, each distinct in his own way. When they are at school, I imagine their differences are taken into consideration, to the degree it is possible in the context of a heterogenous classroom. I am all for the support and cultivation of individual learning styles. So too, I am all for innovative teaching techniques that cater to a range of personalities. What I am not for, however, is the notion that three-quarters of my children shouldn’t be expected to sit still because they happen to have been born with penises.

Sitting still is a skill, Jessica Lahey tells us in The Atlantic, that “many” boys do not have, even by the time they are at middle school. As a mother of multiple males, I read this article with interest and also dismay. Particularly disheartening was the litany of statistics it included about the problematic state of boys’ education generally. Numbers tend not to lie. If it is true that, as a category, boys are somehow being penalized for characteristics that are contingent on the possession of a Y chromosome, changes should be made. The question of interpretation the numbers raise, though, is where contingency ends and correlation begins. How much, in other words, can behavior be reduced to an innate gender issue? And what can we do, as parents, to help our sons avoid the “pink” slips before they set foot in the classroom?

I am not naive about the reality of gender divides: raising boy/girl twins makes that virtually impossible. But, in many ways, it is my older two children who have taught me a more cautionary tale about stereotyping patterns of behavior by sex. Boys behave like boys, the saying goes, except when they don’t.

And my first son didn’t. He was calm, he was ordered, he was rule-abiding. He had a mean pincer grip and the ability to focus on tasks for long stretches of time. He could sit quietly in a restaurant, armed only with crayons and a piece of paper. He never raised a hand to another toddler in the dog-eat-dog world that is playgroup. Not once did he beg for a digger for his birthday. When he started school three years ago, he took to it like the proverbial duck to water.

Starting school is a great equalizer. In the playground, we are used to marshaling evidence about our kids to explain - and explain away - their developmental differences, their varying levels of maturity. He’s a boy! She’s a premie! He’s a third child! These descriptions matter in the early months and years of life. And yet, when a kid walks into the classroom for the first time, the lines in the sand that were drawn so darkly, at two years old and at three, begin to fade away. As is necessary. Unacceptable behavior that was, in the past, justified by any of the above qualifiers becomes simply what it is: unacceptable behavior.

My next son started the Scottish equivalent of kindergarten this autumn at just over four and a half years old. A boy and a second child and the youngest in the class…was he doomed? From my point of view, each of these factors was equally compelling in the assessment of his school readiness. (It so happens that more of the kids I know whose parents would describe them as “wild” are subsequent children rather than male children, though I have yet to hear anyone make the claim that something is rotten in the state of second children’s education). At the first parents’ evening of the year, my son’s teachers confirmed for me what I already suspected. He was doing well overall, but there were a few concerns. He had trouble controlling his pencil, for example. He got distracted on occasion. Sometimes he didn’t listen carefully enough.

In the course of the conversation, nobody mentioned the fact that he is a boy, even though these are the notorious arenas in which five-year-old males lag behind five-year-old females. Nor, I came to the conclusion on the way home, should they have. From the time he was little, I have held this child up to the same standards of behavior I did his older brother before him. I consider myself lucky to have seen firsthand (and to have seen first) that boys don’t always “have to be boys,” in the negative sense of that aphorism. Skills such as sitting still, writing neatly, focusing and following directions might be stereotypically “feminine,” but they are not universally so, which implies they can be taught.

A recent study indicates as much. In a small investigation of gender differences among 3-6 year olds in the United States, Taiwan, South Korea and China, “[r]esults showed that girls in the United States had significantly higher individual behavioral regulation than boys, but there were no significant gender differences in any Asian societies.” Disruptive boys, it turns out, are a culturally specific phenomenon. As parents, we might want to take a hard look at our own attitudes towards gender to understand why our sons, in particular, are collectively struggling in the classroom: how we box into pink and blue certain kinds of toys and certain schemas of play; how we encourage or discourage different emotional responses depending on the sex of the child; how we are prone to overlook or write off questionable behavior as an inevitable byproduct of masculinity. All of these are far-reaching ways in which are boys are softwired - not hardwired - from a very early age.

Children are inherently variable, of course they are, with individual strengths and weaknesses. Good teaching practice should reflect this. But attributing traits such as not being able to pay attention sufficiently to fixed characteristics such as gender can create the false impression that the traits themselves are immutable. Which, in turn, can downplay the effort needed to improve them.

And this is, in large part, what school is about: teaching kids how to control themselves, their bodies and their minds. The first years of formal education should offer a bridge, in this way, between the fluidity of toddlerhood and something far more structured. Where I live in the UK, “active learning” at tables with frequent opportunity to move around gives way, over time, to increasingly longer periods of staying focused in row upon row of desks. Perhaps tellingly, at almost 8 years old, my oldest son is already perplexed by the question of whether it is boys or girls who are better at sitting still. By the end of Primary 3, the answer for him is: “It depends on who they are.”

By the end of Primary 1, my fidgety second son has come a long way in terms of his ability to concentrate. Mastering this important skill will be a process for him, no doubt, as it will be for a handful of other kids in his year. So long as what is required of him in the classroom, however, is deemed appropriate for the majority of the students, I will continue to expect him to adapt his behavior rather than the other way round. When my daughter goes to school, I will expect just the same of her. 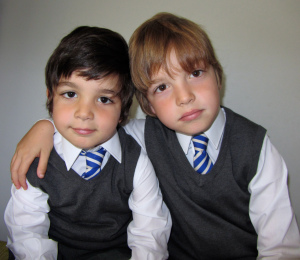