peas in a pod

Last week, I did a segment on HuffPost Live about multiples. It was a conversation among six women, each of whom had been touched by twins in some way. Of the six, two were a set of twins themselves, utterly lovely and unambiguously delighted with their twinhood. The point of the show was to discuss the challenges inherent in having two babies at the same time, but the presence of these two adults turned the table on the argument: raising twins is a different creature from being a twin.

I find this heartening. And also worrying. The unique bond that twins potentially share is the carrot dangling in front of the flummoxed parent of multiples. For me, as the mother of two two-year-olds, it is the prize looming in the distance, visible yet slightly out of reach. The difficulty of having twins is front-loaded. You stumble through the incapacitating pregnancy, the early months of sleeplessness, the first years of snatching and biting in the hope that it will give way to something grander: a relationship more intimate, a relationship more profound than the one between consecutively spaced siblings.

Every pair of twins is distinctive, just like every singleton, but there are two broad categories into which they all must fall: identical or fraternal. Identical twins come from a split embryo. They may have small variances in appearance, in face shape, in height, but their genetic make-up is fundamentally the same. Fraternal (or sororal) twins, on the other hand, arise from two separate eggs and two separate sperm. They are as different from - or as similar to - one another as any siblings can be. Their twinhood is contingent not on a commonality of DNA but on the fact that their mother happened to ovulate twice. Or on the fact that more than one embryo was transferred into the uterus of a woman undergoing fertility treatment.

Our fascination with twindom - with the special languages it inspires, with its mirror-images and tricks on teachers - is not with the second sort of twin. It is with the first. Much of the cultural iconography of twinhood features two people who look the same. Think of The Parent Trap, for instance, of the Doublemint ads, of the Weasleys, of Mary Kate and Ashley. Think of ‘Thing one’ and ‘Thing two’, the mischievous playmates from The Cat and The Hat who make for the Halloween costumes of doublets everywhere. Dr. Seuss had a well-known interest in twins generally, but most of his literary incarnations are identical. In a recently recovered story about two such boys, Tadd and Todd, he writes:

They were so much alike, from their hair to their feet,

That people would stare when they walked down the street,

And no one, not even their own mother, knew

My twins don’t have this problem, they never will. They are as un-twinny as it gets. And not just because they are a boy and a girl. They have different colored eyes, different colored hair, different skin tones and completely different temperaments. They have always appeared to me - and maybe this is more revealing of my mindset than the reality of the situation - as two singletons who by chance spent nine months in my womb together.

When they were born there was no twin synergy in our house through which one baby would mystically soothe the next by its mere presence. Quite the opposite: they settled better and slept better when they were separated. The only power they seemed to hold over each other was the ability to wake one another up, even through closed doors. Now, as toddlers, they are undeniably close, but the closeness often manifests itself in violence. They fight in a way, with a frequency and ferocity of temper, that shocks me.

Is this the stuff of a ‘special’ bond?

Maybe. Intimacy is a double-edged sword. It’s not only kisses and cuddles. It’s judging weaknesses and pushing buttons and staking claims, of which my two are early masters. At this age, they do it by instinct but I imagine it will become more considered over time. They are only just beginning to have the cognitive capacity to grasp the concept of their twinness. They are only just beginning to have the words to tell me how they feel about it. When they are both demanding my attention, scrambling over each other in an effort to get to me first, I say to them: ‘But Mommy has two babies! There’s room for you both!’ Ever so rarely my daughter will concede: ‘One baby, two baby, on Mommy’s lap.’ More often, however, is my son’s response: ‘NO! No twins!’

The distinction between identical and fraternal twins raises the question of what the ‘special’ bond between them is based on. Is it the shared genes or is it the constant presence of a same-aged sibling? Is there something a parent can do to encourage it or does it blossom - or fail to blossom - on its own despite external influences? Wouldn’t we love to know. You can’t choose what kind of twins you have any more than you can choose to have twins in the first place. Nor can you choose how your twins will react to the fact that they have a partner for childhood. As Dr Seuss’ tale unfolds:

Now Todd (on the right) was the happier one.

He thought being twins was a whole lot of fun.

He liked it ’cause no one

could tell him from Tadd.

well, it made him quite sad,

So Tadd (on the left side) one day said to Todd,

Peas in a pod is exactly the image I picked for my twins’ birth announcement. It represents everything magical and harmonious about having two babies at the same time. I am increasingly aware, though, that it is a wish and not a given. 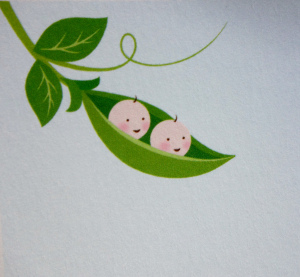