playing with a point

“We live on the planet Naff,” he says.

“Oh,” I say. “Is that Naff with a double F or Naph with a PH?” The question seems immediately relevant.

“Excuse me,” he says. “I can’t understand you. We only speak Naffphian on the planet Naffph.”

“Of course,” I say, wondering where I can make an emergency purchase of the requisite Rosetta Stone.

“And we smoke pipes,” he says, pulling a Lego configuration from the folds of his pocket which may or may not look like a pipe, depending on the angle. “What flavor do you think this is?”

“Um…toasted marshmallow,” I say, which is my favorite flavor of jelly bean so seems as reasonable a guess as any.

“Don’t be silly,” he says. “It’s bubble gum. Have a smoke, Naffphian pipes aren’t bad for you.”

“But where is your smoke ring?” he asks, disappointed. “Every Naffphian has his own smoke ring.”

“Pfffffffff,” I say. My signature smoke ring turns out to be a pineapple.

“No, Mom,” he says. “That’s a spaceship. You can see from the turbo boosters on each side.”

This is how my seven year old plays. It’s how he has played, with increasing degrees of sophistication, since he was old enough to string a sentence together. He is an imaginative little creature, my son Leo. He invents things on a regular basis out of otherwise mundane household items—toilet paper tubes and sticky tape—things you didn’t quite know you needed. Like The Wind Sock of Doom, which (according to him) detects the wind direction, particularly in a dungeon.

Leo is imaginative in a way I am not, the result of which is that I have trouble joining him on his creative jaunts. His kind of play is not the kind that comes naturally to me. I watch him spin these elaborate scenarios with an equal measure of pride and bafflement and the best I can do is try to keep up. But usually I feel panicky and distracted in the face of the game’s openended-ness, its lack of rules or obvious structure. The sad truth is that I am a slave to logic. My imagination tends to run out of gas before I even leave the driveway.

You can read the rest of the post here, as part of a series on play at You Plus 2 Parenting. 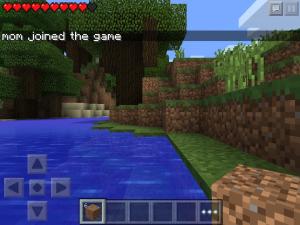 look out! mom has joined the game…

Tagged as 28 days of play, imaginative play with kids, playing with kids is hard, You Plus 2 Parenting