Tag Archives: when should a kid get an email address?

Every year has felt different, but seven feels different in a whole new way. According to child psychologists, it is the beginning of the phase of development known as ‘middle childhood’. This has various meanings, depending on whom you ask. Piaget would tell you it is about the gaining of certain ‘cognitive’ abilities. Erikson would tell you it is defined by the ‘psychosocial’ conflict between industry and inferiority. Freud would tell you it is a period of latent ‘psychosexuality’.

All of these theories illuminate aspects of the sea change that takes place between the first years - babyhood, toddlerhood, preschool-hood - and what lies on the other side. All pinpoint newfound capacities to reason and to function independently. All recognize a previously unknown faculty to assess one’s place in the social matrix. But to a mother, the novelty of seven is rather more simple.

It is the age at which you look at your kid and realize for the first time: you are truly your own person. Not simply an extension of me and not simply the constellation of adjectives I use, and have always used, to describe you.

There are flashes of this feeling throughout early childhood, to be sure, each felt strongly by virtue of the contrast with what went before. There is two-years-old, when the acquisition of language opens the floodgate of communication. There is four-years-old when the questions, coming thick and fast, reveal a concerted effort to piece together the rules of the game. And there is six-years-old, when interactions played out against the backdrop of the schoolyard demonstrate a growing awareness of group dynamics.

Each age offers its own glimpse into the inner world of the child. At seven, however, it’s as if the curtain sweeps open. At least this is how it has been for me and my oldest kid. I look at him, seven-and-half last month, and I try to figure out, as I do every year, what has changed. At first I don’t see it: he has essentially the same armory of skills he had at six, the same kind of low-level self-sufficiency. But then it hits me.

It is his relationship with the written word. This is when I feel his independence like a bullet. This is when I gush (and I’m not a gusher) ‘Oliver, that’s amazing!’ and he tells me to ‘Get over it…I’m old now’. It’s not a skill set per se, it’s more a confidence and a fluidity. It’s the way he now writes little songs and stories in his notebook without prompting; the way he reads for enjoyment, not because it is a homework assignment or to prove that he can. It’s the way I find things in his schoolbag, lists that he and his friends have made of football fixtures, the Valentine’s Day card, the anonymous Valentine’s Day card, that come home with him in February.

Most recently, however, it is the emails he sends me, the emails he sends the whole family actually. A few weeks ago he asked for his own account so that he could keep in touch with our far-away relatives. I ummed and ahed about this, not sure where the reluctance was stemming from, but also not sure if this was something seven-year-olds should be allowed to do. With the first kid you are never quite certain where the lines of age-appropriateness are drawn. In the end, I agreed. I couldn’t see the harm and, to be honest, I was just going through the motions: I figured I might as well secure the preferred gmail address while I could.

But then I opened my own email one day to find a message from ‘Oliver Tomkins’, the name sitting casually in my inbox like it had always been there. Except that it hadn’t. ‘I love you, Mom. What are we doing today?’

Gulp. I have known since he started school that Oliver has a life outside of my house and outside of my heart. But there is something about seeing his thoughts transcribed into words that makes this life without me feel, all of a sudden, real. Not in bad way, just in a growing-up kind of way. He showed me an entire correspondence he had with my dad about the Tar Heels. He wrote to my sister ‘Hope you have a safe journey’ when she texted him from the airport. It’s not the sophistication of the conversations that gets me, it’s the fact that they are being had at all. And it is the understanding that I am very much a third party.

I have always viewed writing as a unique window into the soul. This probably explains why I feel like my son’s ability to express himself meaningfully on paper (real and virtual) is a thrilling new layer to his identity. And yet, the fact that he is doing so at the age experts agree is the beginning of a period of time when individuality blooms in earnest is obviously not a coincidence. Middle childhood used to be perceived as a holding pattern, a stop-gap between the major development of the formative years and the bomb of adolescence. Now it is considered more important than that. It certainly feels like a new chapter for Oliver, and one that he will start to write himself. 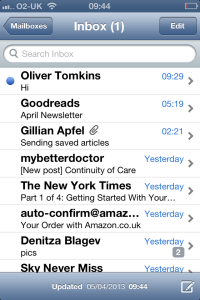 oliver in my inbox

Tagged as middle childhood, seven years old, when should a kid get an email address?