I was a stay-at-home mom for eight years. For eight years, I had no employment outside of raising my own children. I made no money, I had no career obligations. I was a classic “opt-out,” a woman who traded in a potentially high-powered job for the hearty mix of wonder, boredom and mess that is being a full-time caregiver to small humans. I didn’t choose to stay home because I thought it was best for my kids, that daycare or working mothers are somehow lacking. I chose it because it felt right at the time and I am well aware it was a privilege to do so.

Two years ago, I chose something different. I got a job, a part-time job as a writer, that has taken up increasing amounts of my day, that has colored increasing amounts of my identity. Now when people ask me what I “do,” the answer is more complicated. It is a Venn diagram rather than a simple circle. I am half of one thing and half of another, and because both halves happen mainly in my home, there is an intersection, a blurry middle ground in which I find myself crafting sentences and macaroni and cheese at the same time.

Half of one thing and half of another. That’s not entirely accurate, though, is it? You can be a part-time worker, but can you be a part-time mother? It makes me think of the Stevie Wonder song, “Part-Time Lover,” I hum it to myself, changing the words for effect. Because yes, compared to the past, when my children were all of the phases of the moon to me, sometimes I feel like a part-timer indeed. 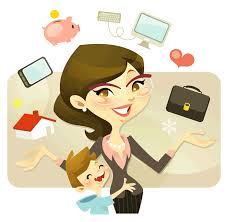