prioritizing a woman’s choice in the breast vs bottle debate

Another day, another heated discussion on Facebook about breastfeeding. This one in response to a somewhat provocatively titled New York Times article, “Overselling Breastfeeding,” by Courtney Jung.

Like Jung, I’ve spent years of my life breastfeeding. I’ve cried tears of pain because it hurt so damn much, tears of anguish because all I wanted to do was roll over and sleep when the baby was demanding to be fed yet again. And I’ve been absolutely high on the beauty and power of sustaining life from an elixir of my own making. In other words, my experience with breastfeeding has run the gamut and, in hindsight, I can say with confidence that my decision to feed my children in this way was, on balance, the best one for me.

Ah, but there’s that pesky word: best. The albatross around the breast-versus-bottle debate’s neck, the thorn in its side. For as soon as you introduce a superlative into a conversation about parenting—particularly a superlative with no qualifier, a la “breast is best”—in rushes Obligation and her trusted handmaiden, Guilt, following swiftly in its wake.

Now, I am very prepared to say that breast milk is a better food than formula, in that it is perfectly tailored to a growing baby and has properties that we haven’t been, and might never be, able to replicate in a synthetic product. And yet, semantically and conceptually speaking, “better” doesn’t always equal “best.” Nor is the internal quality of the milk given—and the hypothetical outcomes it might generate as a result—the only factor in the equation of baby’s overarching happiness or health. Especially when, as we are fully aware by this stage, a mother’s well-being and her baby’s are intricately entwined. Such is old news.

What’s newer, and this is a focal point of Jung’s essay, is that breast milk isn’t quite as superior to formula as we once thought. Babies who are formula-fed grow into adults who can be smart and healthy and, according to the latest research, rather indistinguishable from their breastfed counterparts. What we have now, it would seem, are simply two good feeding options available for infants.

You can read the rest of the piece here, at Ms. Magazine. 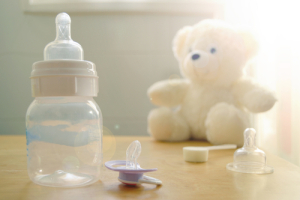