independence referendum is a win for scotland’s children

The last couple of days have been an extraordinary time for Scotland. On 18 September, with a record-breaking turnout of 85%, the people here voted to reject independence and keep Scotland a part of the United Kingdom of Great Britain. Throughout the referendum - and irrespective of the result - I have been struck by what a positive experience this has been for my kids. I am proud to have had a piece about it published on the New York Times’ Motherlode blog:

GLASGOW — The people of Scotland will make a momentous decision on Thursday about the fate of a 307-year-old union. They will vote “yes” or they will vote “no” on the question of whether Scotland should become a country independent from Britain. There has been much rhetoric on both sides of the divide about the potential ill effects of separation (or not) on Scottish children. Everyone agrees that nothing less than the well-being of future generations is at stake. And yet it is worth noting, amid the crossfire, that one effect of the referendum on our children is overwhelmingly positive: They are experiencing participatory democracy at its height.

Some of Scotland’s children will be getting an early taste of that democracy themselves. For the first time in a major ballot, the British franchise has been extended downward to include 16- and 17-year-olds. That’s 124,000 teenagers who will now be able to vote on this particular question. Far from stereotypical adolescent apathy, 72 percent of eligible voters younger than 18 say that they are “rather” or “very likely” to cast a ballot. Which is perhaps not surprising as the referendum has included a push for young voters, with both official campaigns making a concerted effort to reach out to university students.

But the referendum is also touching younger students…

You can read the rest of the article here. 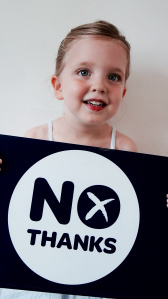