O tempora! O mores! The strange moment of parenting we live in.

We agonize over the right way to do it. We bemoan that it’s no fun at all. And then we cry into the day’s fourth cup of coffee about how quickly it’s passing us by, in-between baking a life-sized My Little Pony birthday cake and shuttling the toddler to Kumon. Ours might be a 21st century predicament, but it occurs to me that maybe, just maybe, it is the ancients who can best put it in perspective.

You want to see some real parenting problems that make dealing with a kid who eats only white food feel like a warm summer’s breeze? Ask the dramatists of classical Greece, those masters of the double bind, those poets of the no-win situation. Nothing will make you think you have it easy, that you are in fact a good parent, like the woeful choruses of a Greek tragedy.

“We are all Greeks,” Shelley famously proclaimed, by which he meant that our contemporary experience as human beings is rooted in the 5th century BCE. Or something grandiose and cryptic like that. At any rate, I’m pretty sure he meant that we modern moms and dads can learn a thing or two from our Athenian brethren.

Sing to me, Muse, of parenting lessons more useful than BabyCenter emails.

I admit this admonition is more confusing than it might otherwise be, if the whole attachment parenting concept hadn’t caught on like wildfire. Of course none of us is sleeping with our sons, that’s a disgusting abomination of nature. Thanks to Dr Sears, however, many of us are now sleeping with our sons. Open your bed to your children, he says. Skin to skin is soothing. Wear them, if you have to. You know what I say? Tell that to Jocasta. Okay, I’m just kidding again with the incest. But maybe Freud was onto something. You know: the Oedipus complex. The threat to the marital bed. The little boy, with flailing limbs, wedged between husband and wife like an iceberg lettuce salad. Sure, Oedipus was a stranger to Jocasta and he was a grown man and they’d been separated at birth. Blah blah blah. For you, modern mother of a young child whom you want out of your bed but can’t quite displace: there is no such excuse.

Modern take-away message: hold your kids close, but not too close.

2. Fathers, don’t sacrifice your daughters for the job (Aeschylus)

Think about it this way: does the fact that Agamemnon had an important “project” to launch (Trojan War), which was ordained by his “bosses” (the Gods) and undertaken for a big “client” (his scorned brother), make the fact that he slit his daughter’s throat okay? Dads, I need you to dig deep here for the answer. As much as you’d prefer to keep the work stuff at work and the home stuff at home, there are situations where the twain shall meet. Like they did at Aulis. And Clytemnestra will be the first to tell you: some excuses simply don’t fly. We mothers understand you take your role as provider seriously, that there’s your ego to consider, your honor, the “office” politics you feel require you to do something you don’t really want to do. But sometimes, for the sake of the family, you just have to suck it up and say “no.” Trust me, your homecoming will be a much happier affair as a result.

Modern take-away message: they call it work/life balance for a reason.

3. Wives, however angry you are at your husbands, don’t kill the kids (Euripides)

He doesn’t do the dishes as often as he should. He feeds the children Twizzlers for dinner. Maybe he’s even made doe eyes at your daughter’s best friend’s mother. And yet, when it comes to our husbands’ many misjudgements and domestic misdemeanors, let’s keep the punishment in proportion with the crime. Right, Medea? Jason was ungrateful, no doubt about it. He wasn’t “pulling his weight” with the family care. And after all you did for him, the sacrifices you made, to leave you in the lurch like that was beyond the pale. I get it. There are times we are so enraged with our husbands and their double standards we can hardly see straight. Should the children really be the ones to suffer, though? Ladies, we need to at least try disconnecting SportsCenter first. 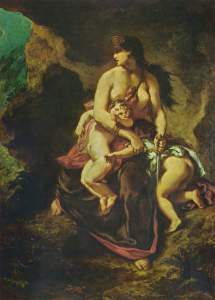