For much of my adult life I’ve been afraid of flying. It’s takeoff that bothers me most. The thundering down the runway, the dramatic dip back. The idea of a four hundred ton machine catapulted off the ground and embraced on its way up by a flimsy scattering of clouds, as if by a long-lost friend.

It’s only since having a child I’ve become convinced there is something primal about my fear. Have you ever seen a baby exhibit the Moro reflex? Watching my newborn throw his arms out in instinctive supplication as the doctor tested him for it, as she let my son fall from her hands in a parody of cruelty, I thought to myself: maybe I’ve never outgrown this. Drop a tiny baby, just a little bit, and their defences ignite. They startle, sometimes wildly, hardwired to react to the sudden lack of substance beneath them. Babies don’t like to feel unsupported. Who does, really?

I used to fly a lot as a kid. I even used to fly alone, though more often than not it was with my older sister. We were known, in aviation lingo, as “unaccompanied minors,” a category of passenger largely comprised of the driftwood of broken homes. From New York to Charlotte, from Mom to Dad, and back again. Summers and some holidays, we would sit in that bulkhead row, specially reserved for our kind, with nobody but the stewardesses to care what we ate or when we last went to the toilet. We were the first ones onto the plane and the last ones off, our safety contingent, it seemed, on being boarded for the longest time possible. And then a parent would collect us at either end, waving from the mouth of the jet bridge as we raced down it toward reunion. Getting on an airplane was as much about saying goodbye as it was about saying hello. 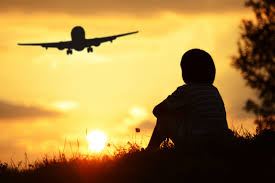 2 responses to “fear of flying”