I didn’t think it would be like this, that my children would fight so much. I wanted a big family to stand over, the captain of a team, not a referee endlessly blowing my whistle on the fifty-yard line of their rivalry.

I didn’t think it would be like this, when my belly started to swell only a year and half after our first son was born. I chose for them to be close in age, I believed less time between them, less air, would create intimacy, like a vacuum. What more beautiful gift to give a two year old than a baby brother?

I didn’t think it would be like this, that they would be so different. “Chalk and cheese,” as we say in Britain, “apples and oranges.” Both fruit, but the juice doesn’t run the same. Intense, focused, solitary meets quirky, frenetic, outgoing; introvert rubs against extrovert. A strange irony that the qualities I relish in one are the very thing that drives the other to distraction.

I didn’t think it would be like this, their dynamic so repetitive, so predictable it defies logic. The same scenario played over and over again, the dance they do. The younger one goads, the older one lashes out. He’s annoying me. He’s hurting me. It’s a tired record, but it keeps on spinning no matter where I put the needle.

I didn’t think it would be like this, that our third child would be two children, that the way they vied for space in the womb would become a template for all that came next. A tug of war so intense it kindles in me anger, the hotness of which I have never felt before in my life. Bicker, squabble, tussle, tangle, twins who inspire a veritable thesaurus of fighting words. This is mine. No, it’s mine. Value defined solely by another’s interest. 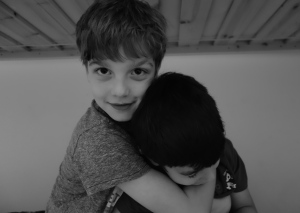 2 responses to “sibling rivalry, a lament”