My four year old started school this autumn. Yes, four years and eight months old. No, not nursery school or pre-school either: proper school with a six and a half hour day and a ‘curriculum of excellence’ to get through by year’s end. He is a spirited four year old and a competent one and you could even call him precocious. But when he walked into that classroom for the first time a few months ago, he was, in many ways that matter to a mother, still only a small boy.

Leo’s birthday is in late November and the school cut off date in Scotland is the first of March. Had he been born in January or February, I would have had the formal option of holding him back. The local education authority here recognizes the possibility that kids born in these two months might not be emotionally and/or intellectually prepared for the rigors of school before their fifth birthday. The kids born in November and December, on the other hand, are destined to be the youngest in the class. It’s fair enough: somebody has to be.

School-readiness is a constellation of concerns. They are interconnected, as you would expect, but they are not necessarily inter-entailing. Leo was ready for school by academic and social standards - he was beginning to read, he was confident amongst his friends - and the idea of waiting until he was close to six to send him (something we could have petitioned for) seemed nonsensical for exactly those reasons. But he definitely retains vestiges of his toddlerhood. He can’t control a pencil particularly well, for example, and he gets distracted and tired in the face of long spells of concentrated activity. He needs help after he goes to the toilet. He still sucks his thumb. These things might be because of his age. They might be because of his gender. Or they might very well just be because he is Leo. It is impossible to tell.

And after parent’s night I now realize it doesn’t matter anyway. As Leo’s two teachers and I sat down to discuss his progress over the past term, I must have mentioned his age at least three times. Neither of them, it occurred to me on the way home, mentioned it once. To them he wasn’t a four year old lamb in the mix of five year old lions - lions who stand a head taller than he does and form their letters with pretty precision and wipe their own bums. To them he was just another kid in the room, treated individually one would hope, but measured, ultimately, by the same standards as everybody else.

This is as it should be, I know that in theory, but it is an adjustment nonetheless. In the playground, we are used to marshalling reasons to justify our kids’ shortcomings vis-a-vis the other kids: he’s a preemie! She’s a twin! He’s a boy! She’s a third child! In the classroom, these reasons become irrelevant. School, at least where I live, is the first time that children are objectively and systematically gauged against their peers with no real qualifiers. All of a sudden the months between them that meant so much when they were two and three are worth shockingly little. It is an inevitable and natural progression: the significance of age differences and mitigating factors must ebb at some point for the concept of a ‘grade’ to work. But when your kid is on the wrong side of the line, and he is now sitting cheek by jowl with the boy who was held back and is almost a year older than him, it can be alarming. And it makes an emotive argument for delaying school entry in borderline cases, especially when other parents are doing the same thing routinely.

I escaped this anxiety with my first son. He was born in September and school felt like it came at just the right time for him. His birthday was perfectly orchestrated for the school year except, of course, that it wasn’t because the thought never crossed my mind in the consideration of when to conceive him. What is the best time to have a baby in terms of the school cut off? It was one of those parenting questions I didn’t even know to ask.

But by the time I was expecting my twins, two things had happened which gave me a better indication of the answer. The first was a matter of experience: my oldest child was already at school by then and I could see clearly how his age was among the elements that helped him adapt to it so seamlessly. The second was a matter of coincidence. My book club read ‘Outliers’ by Malcolm Gladwell and I was exposed to the idea that there is a firm correlation between being the oldest in the class and being the most successful, at least in the context of Canadian hockey players. The message there - and it is one that resonates readily with our parenting culture - is that holding your child back is a very good way to push him forward.

And then a funny thing happened. My twins were due March 15 (by chance, I promise!), but being twins I was only meant to carry them to 38 weeks. This put the date of delivery at, you guessed it, March 1. It fell on a Tuesday in 2011 and the hospital offered me the Monday as well, probably out of sympathy. There it was: on one level a decision between having an Amethyst for their birthstone or having an Aquamarine, but on a far more profound one the choice between being the lions or being the lambs. I chose lions. Given what I now knew, it seemed remiss not to.

I made that choice before Leo started school. But the more I watch him manage the routines and expectations of Primary 1 and the more I watch him grow up and into his new identity as a student, the more aware I am of how happily ignorant he - and his peers - are of the distinctions in maturity between them that matter so much to their parents. Or, rather, the distinctions that we thought mattered so much before we actually threw them into the jungle and let them fend for themselves. The younger kids in the year are younger, you can certainly see that, but they are being pushed forward just the same, learning from the older ones and catching up to them too. And the more I watch, the more I find myself worrying not about Leo but about my other two children, the two who will be the oldest in their class when the time comes and how very long those 12 months of waiting might feel to us all. 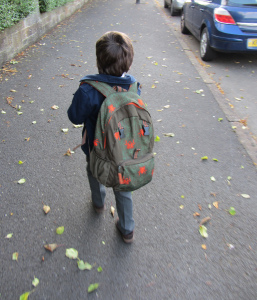 10 responses to “holding back, pushing forward”