There are not many contexts in which I can make the claim, but when it comes to parenting I am pretty sure I want to be French. Everything I read about this classy, balanced mode of motherhood makes me feel like a Parisian trapped inside the body of a neurotic New Yorker. Well, that’s how I like to imagine myself, anyway, feeding the kids brie and just saying non.

And yet, both my nationality and my country of residence seem to be working against me in this quest for a little childcare oh là là. Not only am I American, but I have been living in the UK for 14 years now. All of my children were born on this small island: I have only ever been a mother within its borders. Britain is separated from the US by the enormity of the Atlantic Ocean and from France by a Channel small enough that it can be swum. In terms of how they parent, however, the Brits are much more like the people who actively sought independence from them than the ones they can see from the cliffs of Dover. Sadly for me.

The idea of a parenting ‘culture’ has come to the fore recently. And, with it, the growing awareness that differences between cultures can illuminate how practices we take for granted as quasi-universal are actually idiosyncratic products of a particular time and place. The importance of this ethnographic reality for philosophy, and for life in general, can be traced back to the eighteenth century. But its application to parenting is relatively new.

The more I learn about the qualities that define other countries’ dominant strains of childrearing - the French so cool and measured, for example, the Americans so extreme and kid-centric - the more it occurs to me that I don’t actually know what modern British parenting is. What are the catchwords for our unique variant of parenthood, I wonder, suspended as we are between the old world and the new, between the majesty of empire and the edginess of Cool Britannia?

I can certainly conjure up a stereotype, a mixture of cliches I like to call ‘tea-and-crumpets’ parenting, an outgrowth of the great Victorian principle that children should be seen and not heard. You’d recognize it from the movies in an instant: the two children impeccably dressed, beaming bright like cricket whites, not a strand of hair loose from its plait. They politely nibble crustless cucumber sandwiches before being presented to their parents for a short evening visit, only to be whisked away an hour later by Mary Poppins and settled for the night in another wing of the house. And when they are too old for the nursery, that’s when it’s time for boarding school. The Dowager Countess of Grantham captures the feeling of it well:

Violet Crawley: One forgets about parenthood. The on-and-on-ness of it.

Isobel Crawley: Were you a very involved mother with Robert and Rosamund?

Violet Crawley: Does it surprise you?

Isobel Crawley: A bit. I’d imagined them surrounded by nannies and governesses, being starched and ironed to spend an hour with you after tea.

Violet Crawley: Yes, but it was an hour every day.

This conception of British parenting though, like Downton Abbey itself, is a relic and it is one that is firmly associated with the ruling class. It doesn’t speak to modernity. Nor it does it speak to the rest of us on this island, who don’t live in manors and who can’t afford the luxuries that come with them. We aren’t all prim to a fault, repressed and starched to the eyeballs, and we aren’t all raising our kids to be like that either. Even so, the stereotype hasn’t quite been replaced by anything else.

The past half-century, in other words, has not seen the rise of any influential British cultural artifacts or points of reference in this respect, especially when compared to America.We have no Dr. Spock, no William Sears, no massive media platform dedicated to dissecting every detail about how we deal with our children. The closest we have to a local parenting guru is Gina Ford and if you are a non-British person reading this, have you even heard of her? From somebody other than me?

Britain’s default position in areas where it doesn’t have a long-established - and workable - indigenous tradition is to look not to Europe, but to the United States. It is ironic given the history, but true nonetheless. In this way, it seems that ‘British’ parenting is not much more than a watered-down version of how the Americans do it, an American Lite, if you will. Most of us would have to plead guilty to the same catalogue of shortcomings that Americans are charged with on a regular basis - the hovering and the hothousing and the lack of discipline and the constant snacking - but we do it with slightly less calories, metaphorically speaking. Nothing over here is ever as big as it is over there.

I suppose this means we won’t be dining on escargot en famille tonight after all and that I’ll have to console myself with a cup of Earl Grey instead. And perhaps a biscuit or two. While the nanny puts the kids to bed. 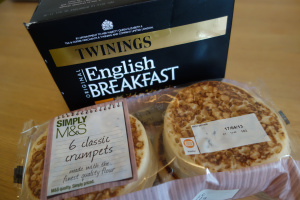