should young kids be expected to listen to their parents?

Here’s a question for you and it’s not rhetorical: are young children supposed to listen to their parents? The first time, maybe the second, without a roundtable discussion, tears and/or backtalk at every turn? In theory, it sounds obvious. Of course they are! In practice, however, the idea borders on the ridiculous. I spend untold hours a week negotiating with my kids or waiting out their behavior in some shape or form. The paradigm of the ‘disciplined’ child - the child who, miracle of miracles, actually does what you say - has become a relic from the past, that bygone age of Father Knows Best. We are not a generation of ‘Do It Because I Said So’ parents.

We are instead raising a legion of tiny lawyers, with more bargaining power, wiggle room and opportunity for choice than ever before. And there is progress in this, no doubt. But there is also fallout. We are the parents derided for indulging, coddling, kowtowing and worse. We are cast by many in the family drama as lowly subjects, slaves to the whims of our ‘benevolent’ (hopefully) dictators, what Pamela Druckerman’s French friends call enfants rois (child-kings). English supernanny Emma Jenner diagnoses us with a chronic case of ‘fear of tantrum’ and the inability to put our needs ahead of our children’s. Frank Bruni would describe our increasingly infamous take on parenting as the ‘eight-last-chances’ approach.

According to experts, there are actually three main approaches to parenting: authoritarian, which emphasizes obedience; permissive, which is lacking in guidelines so as not to upset the child; and authoritative, which blends a caring tone with structure and consistent limit-setting. Most of us, I am guessing, would raise our hands enthusiastically for category number three, either as the style of parenting we embody or the one we aspire to. And yet, authoritativeness itself is a wide berth.

Because of my family situation, I have had the strangely bifurcated experience of being, in one life, two different types of mother. Both of whom I would place somewhere on the authoritative continuum, the first version leaning closer to the anything-goes mom, the second one tottering on the edge of an attempted authoritarianism. The shift is partly due to circumstance. With four kids, the last two of whom are twins, there is a Gestalt vibe to my parenting these days, which makes it virtually impossible to cater overly to any one child’s ‘needs’ or ‘perspective’. In our house, true permissiveness would devolve rapidly into unlivable chaos, which means that my desire for order sometimes looms larger than my belief in the importance of a ‘caring tone’. But I have also changed tacks a little because I learned a few things in the intervening years between children, having watched my older two emerge from the frat party of toddlerhood with behavioral hangovers of entitlement.

As a result, the mother I am to my toddlers today falls perilously close to the one Tovah P. Klein warns against in her engagingly written and thoughtfully-constructed book How Toddlers Thrive, the thesis of which is that once you truly understand your toddler’s point of view, you will see that ‘controlling’ him is counterproductive to his well-being. I enjoyed this book, I recommend it and I think it would have spoken to me deeply had I read it in my first incarnation of motherhood. The rub of it for me right now, however, is this: while I feel confident that I understand my toddlers’ motives and sufficiently appreciate the wonders of their under-developed prefrontal cortexes, I still want to control certain facets of their behavior. Does that just make me the worst of the worst?

Klein believes in boundaries: authority is good. But she largely equates ‘controlling’ a toddler’s behavior with ‘shaming’ him and shaming, as you can imagine, is bad. ‘By asking them to behave in a specific way or be different from how they are just now,’ she writes, ‘we make them feel ashamed.’ This is to be avoided. My problem is that I don’t always see how to enforce the boundaries I want to enforce without being ‘controlling’. What, in other words, does exerting authority look like without the handmaiden of control? If setting limits is essentially making rules (e.g., we only draw on paper, we ask before taking food), and the rules are being repeatedly balked at, what are we supposed to do in the name of defending our boundaries if not ask our toddlers to behave in a certain way or, failing that, to make them? When limits aren’t properly and consistently imposed, authoritative parenting begins to acquire the I-don’t-want-to-upset-my-kid sheen of permissive parenting.

It is a glaring feature of How Toddlers Thrive that there is no real mention of ‘misbehavior’ in its pages, nor is there any discussion of discipline (neither of these words, for instance, appears in the index). The idea being, I presume, that all of a toddler’s actions can be explained - and explained away - as part of the growing process. Toddlers aren’t naughty per se, they are simply learning. But at what age does questionable behaviour become misbehavior that needs to be sanctioned (the book defines its range as ages two to five)? When does barking orders at everyone around you become, in fact, ‘rude’ and not simply ‘an expression of self’? When does hitting your brother become ‘aggressive’ and not simply an ‘inability to deal with anger’? When does not listening to your parents become ‘defiance’ and not simply an ‘attempt at independence’. After the hundredth time you’ve asked, the five hundredth, the thousandth? When they turn four years old? When they turn five? Klein talks loosely about the time for this coming ‘later’, but I have been amazed at how quickly condoned habits become ingrained (especially with some children) and my fear is that I missed the window somehow in my first rodeo.

I like the idea of getting on my knees, metaphorically speaking, and seeing the world from my toddlers’ perspective. Giving them a break when they feel vulnerable because the routine has splintered or because Mommy is going away, yielding to their eccentricities as much as is pragmatically possible. But day in and day out we have rules in our house that need to be followed, for the benefit of the family as a whole, and I don’t think three years old is too early to be expected to follow them. Or to suffer the consequences if not.

Should children listen to their parents? I took a poll amongst my own kids:

My eight year old says: children should listen to their parents only if they [the children] think what the parent is proposing is a ‘good idea’.

My six year old says: children should listen to their parents if they don’t want to get shouted at.

My three year old says: Not really. But maybe I’ll listen to you next time.

My other three year old made no comment. He wasn’t listening to me when I said I wanted to ask him a question. 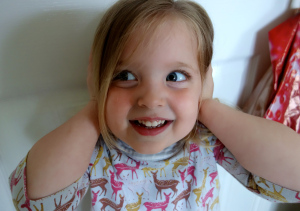 This post is part of the Brilliant Book Club. Read the other thoughtful essays on Tovah P. Klein’s How Toddlers Thrive: What Parents Can Do Today for Children Ages 2-5 to Plant the Seeds of Lifelong Success at the links below:

15 responses to “should young kids be expected to listen to their parents?”