According to the World Health Organization, the concept of “family planning” allows people to attain their desired number of children and determine the spacing between them.

According to the old Yiddish proverb, men plan and God laughs.

I had a plan for my family. I wanted three children. If you had asked me before, I would have said this: two boys, relatively close in age, and then maybe a girl, though I wasn’t bothered about the sex. I would wait a little longer to have the third child—settle the first one into school, break the back of the second’s toddlerhood—so I could appreciate fully that last ride round the carousel of new motherhood. So I could swill it in my mouth like the fine wine it is.

I had my two boys, just over two years a part. And then three and half years later, I had twins.

I’m not sure I think the configuration of a family is something we should aim to control absolutely, though modern medicine offers increasing opportunity to do just that. There is much beauty to be found in the unknown, in the mysteries the reproductive process is so good at serving up to us. But still we are human. And still we make plans, we make choices, whether Mother Nature is smirking behind our backs or not. We harbor ideas and desires about how many children will be sitting at the dinner table, about what they might be like, and we have regrets, too, regrets that creep in like frost, even though it’s not always socially acceptable to say so.

I planned for three children and I ended up with four, and it has changed my life more than I ever imagined. 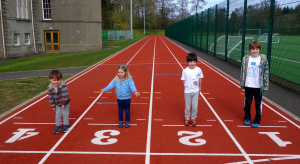