The woman standing over my daughter is about to work a miracle. She’s swivelling the chair from side to side, assessing the damage and using a tone perfectly calibrated to keep us both from panicking. I’ve sunk into a strange calm by this point, anyway. Now that I’ve gotten us here, now that it’s out of my hands.

“Well,” she says, “it looks like somebody’s had an adventure this morning!” And my daughter does that thing with her face—eyes to the side, lips curled at the corners—the thing she does when she’s half embarrassed by, but half revelling in, the attention she’s drawing.

They were expecting us at the salon, I didn’t have to explain it again. A small mercy. We were ushered towards the back, as several different people, at several points on the short walk, smiled smiles somewhere between pity and been-there-done-that.“It’s going to be fine!” They said. “It’s only hair!” They said. Of course it’s only hair, I thought, but that didn’t stop my stomach from filling with lead when I saw the great big wad of it balled in the dresser drawer, dead and mousy-looking where once it had shimmered with light as it swung from my daughter’s head.

They hid the evidence, the two of them together. This is how I discovered my daughter was herself complicit, that it wasn’t just her twin brother wreaking the havoc. She was the one who showed me where it was. “Where’s the hair,” I kept yelling, “where is it?” Because for several moments I couldn’t quite process what had happened, and without the physical product of their little escapade, the whole thing seemed vaguely impossible. An optical illusion: half of the hair hanging straight, as I remembered it, on one side of her head, and half of it missing, chopped into haphazardly, stair-stepped in a way that made her resemble a victim of extreme circumstance or the fashion trends of the eighties. 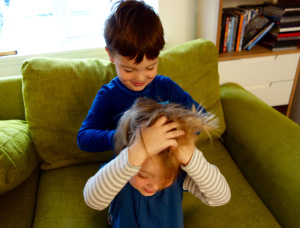 3 responses to “the haircut”