mothering in the rain

I’m wet through; so are you.

This is a nursery rhyme my children know by heart, many British children do, because the pitter patter of raindrops is the soundtrack to so much of their lives. Faces pressed against streaky windows, waterproof hoods pulled tightly over heads, most days my kids leave the house and are touched instantly by some form of moisture. Whether it is a misting that hangs in the air like gossamer or a sideways pelting that stings on impact, onwards they go, always in search of the next dry port of call.

We live in Scotland, where there is measurable rainfall for up to 250 days of the year (in certain parts) and where the seasons bleed into each other with a relatively moderate spread in temperature between them. I have a coffee mug that captures the phenomenon perfectly. It has a series of four pictures on it and, in each one, a bulldog is holding an umbrella against the rain, which continues to spit down irrespective of the season. The only thing that changes is the accoutrement: a scarf in winter, sunglasses in summer, leaves swirling aloft in autumn.

Brits talk about the weather incessantly, which is ironic considering it is so bad, but also telling of how deeply it infiltrates our psyches. There are few psyches as delicate as a new mother’s and, though I am somebody who never complained about it before, the climate here took on a whole new meaning to me when I had my babies.

My second son arrived in late November and for weeks upon weeks we holed ourselves up inside, a scenario I imagine is par for the course with many winter births. But Glasgow winters are particularly bleak. Not only do they fail to produce any fluffy, idyllic-looking snow by way of compensation for the cold but, because of the city’s latitude, the days are shockingly short. The skies begin to darken at around 3:30 p.m. and stay dark until well after eight the next morning. It is a long period to be without natural light and it feels longer still with a colicky baby in arms, a baby who seems already at an obvious disadvantage for developing proper Circadian rhythms. 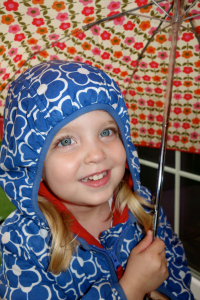