I’m putting my daughter to bed, but her twin brother is still in the next room, waiting. I hear him chattering away, as he dances a toy elephant across the floor. He’s not talking to himself, though, my sister is with him. Well, technically, she’s some four thousand miles away in Vancouver, Canada, while we are in Glasgow, Scotland, but, virtually, she’s right there. My phone is propped against the bookshelf, the perfect angle for surveying the scene. My son is interacting with her as if she is sitting, flesh and bones, in the very same room.

We are regular partakers, my sister and I, in the phenomenon of the FaceTime babysitter. For me this kind of video messaging hasn’t just been a luxury, a vehicle for allowing an aunt to bond with her nephews and niece across an otherwise vast ocean. There have been moments, periods of time, where my sister’s virtual presence has been nothing short of a lifeline. Such is the way when you have two babies and only one pair of hands, only one set of eyes.

Back when their afternoon nap was the fulcrum of our day, we used to speak to her several times a week. I would put the twins in their high chairs at around noon; my sister would be getting ready for work, dawn breaking in Washington, D.C. They would choose the jewelry that best suited her outfit, oohing and ahhing over the various bracelets on display, as I cut crusts off of peanut butter and jelly sandwiches, my laptop offering a comprehensive view of the kitchen. And then I would haul one toddler up to bed, while she would occupy the other, bound safely in his seat, and nap time would proceed smoothly, a staggered affair, instead of the manic free-for-all it became when I was on my own.

My sister has been heavily involved in my children’s lives from the beginning. She is a devoted aunt, to say the least, but she is also a woman with a job that takes her all over the world. The two of us have not lived in the same town, in the same country even, since 1999. Our relationship has been conducted through the channels of whatever technological means have been in the ascendency. Hours-long phone calls via special long-distance plans, Skype, when it was a novelty, and now the holy grail of instant visual access: FaceTime. 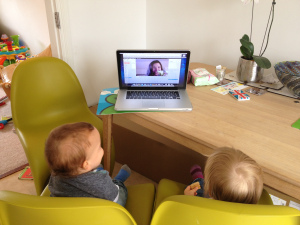 all eyes on auntie g

Tagged as being an aunt, Brain Child Magazine, children and technology, FaceTime with family members