The colors of my children’s eyes make a perfect Punnett Square. It’s the diagram you use to determine the probability of an offspring having a particular genetic trait. I learned about these in 9th grade biology class and the lesson has stuck with me ever since because it explains how two brown-eyed people - people like my husband and myself - still have a 25% chance of ending up with a blue-eyed child. Four kids later and we have stayed true to the numbers.

The palette of our family, though, could so easily have been otherwise: genetics is a science which makes for a fascinating art. The millions of sperm available, the multi-million varieties of DNA barreling down the fallopian tubes and, in the end, only one makes it in. To that particular egg. In that particular month. On that particular day. If sex were had at any other moment, your child might look wholly different from the way he does now.

And I’m pretty sure that most parents are obsessed with what their child looks like, whether they admit it or not. I don’t necessarily mean how cute they think the kid is (though this invariably plays a part), but rather who he looks like and where his features come from. This is, after all, the wonder of reproduction: how you and your partner’s genes will combine in the creation of a separate being. This is why parents spend hour upon hour gazing adoringly into the face of a new baby: to see if they can find an origin for it.

There is something life-affirming about being able to trace your own features in the contours of somebody else’s. I remember my Dad, whom we didn’t see very often while we were growing up, looking at me across the dinner table doing exactly this. Mapping on my face the ways in which I was his. I used to love it when he would tell me in these moments that he could see himself in me, I don’t know why. Maybe because the biological reality of shared genes can bridge other, harder distances.

From an evolutionary point of view, the desire for your kids to look like you makes sense. Historically, we are more likely to nurture - and endure risk for - those that are obviously our own. Infants are said to resemble their fathers at birth for just this reason, so that Dad sticks around despite an inevitable uncertainty about paternity. But we aren’t living in the caves anymore. Modernity has allowed us to be more judgmental about which physical traits we would prefer to see trickle down from which parent and which ones we would rather disappear altogether.

We can have preferences in theory, of course, but we can’t actually do anything about them. That’s the rub. When I was pregnant for the first time, my sister wrote an ode to my unborn child, which included the line: ‘We will wait for ten tiny fingers, ten tiny toes and here’s to hoping they come with her hair and his nose!’ Or something like that. Objectively speaking, as she wasn’t afraid to point out, my husband has the better nose and I have the better hair and baby number one happened, just happened to luck out on both fronts.

It’s a crapshoot, though, that’s what the Punnett Square tells us. And it’s hard to say (though hugely interesting) what impact, if any, the distribution of desirable/undesirable, maternal/paternal traits have on our relationship with a given child. There is a common assumption that a parent naturally gravitates toward a kid that looks just like her, but surely it’s more complicated than that. Do we become more or less forgiving of our own foibles when they appear in our offspring as opposed to the mirror?

And what happens when the kid looks almost nothing like you? This is a reality for many mixed-ethnicity couples, where the gene pool is larger and more diverse. My daughter is her father’s side through and through and I have to confess that I feel a small loss in this. Probably because she is a girl and there is an unwritten expectation that patterns of resemblance should follow along gender lines. I run her fine, feathery hair through my fingers and know that she has been denied something about my own appearance that I take pride in. Her brothers have all inherited the thick hair, but they won’t care. Then again, she might not either.

Aesthetics matter to parents because we want our kids to be attractive in the same way we want them to be smart and happy and well-adjusted: these attributes, on the whole, make for an easier life. But they also matter because they are a mark of a family’s continuity. Sometimes in our children we see lurking not ourselves, but our own parents and their history. This can be a wonderful gift as they get older and begin to leave this world, a constant reminder of the way the generations will always fit together.

Flawed or not, faces tell stories that need to be told. I have a particular fondness, in this way, for my second son’s eyes, which are down-turned and almond-shaped like my father’s, but impossibly dark like my mother’s. They are, at once, the present and the past: distinctly his own but also a poignant relic of a union long since dissolved, a union without which neither one of us would be here in the first place. 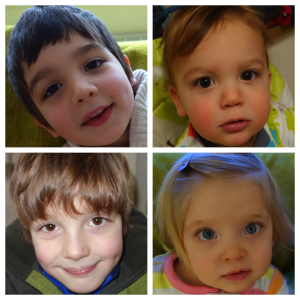 our punnett square: from dominant to recessive