i should have given my kids my last name

My daughter’s last name is the same as her father’s, but only because she came third. Had she been born first, she would have taken mine. That was the deal we struck in the interest of fairness. A boy: Tomkins. A girl: Apfel. I wanted a boy and my husband preferred a girl, so we offered each other the gift of lineage as compensation for mild gender disappointment. The first baby would be determinative: for practicality’s sake, all subsequent children were to bear its surname, whatever sex they turned out to be.

Baby number one was a son and so became a Tomkins, as did the rest of them in time. It is a moniker I never, not for a second, considered taking myself. The full name I had at 26, the age at which I got married, was already a profound part of who I was. It was the name that made the local papers when I won a race in high school. It was the name printed in dark, formal script on three academic degrees. It was the name on my passport, the document that allowed me to leave the country I grew up in and meet my future husband in the first place. Lauren Apfel was a person with whom I was intimately, contentedly familiar. Lauren Tomkins, on the other hand, who the hell was she? Not only didn’t I know: I didn’t care to find out.

Marriage is a new beginning, but, for a woman, it need not be an end. If my husband could say ‘I do’ without losing a piece of his identity, why couldn’t I? This is a question we have been asking since the dawn of feminism and it is one that might sound overly dramatic when posed in 2013. Women today are the flag-bearers, after all, of a ‘kinder, gentler, and more traditionally minded’ postfeminism, as Judith Warner has insightfully put it. We aren’t fighting the same fights our mothers did. Or, at any rate, we aren’t fighting them so hard.

What’s in a last name is not part and parcel anymore of burning bras or the struggle for wage equality, but it is still, I would argue, dramatic. Look at the whirlwind of anxiety right now surrounding the activity of naming a baby. If we show signs, as a generation, of believing that a child’s fortune hinges on her first name, surely we should take just as seriously the import of how we choose her last name. Men certainly take it seriously. This is why the vast majority of them continue to hold the surnames they were born with.

The reasons a woman might forgo the surname she was born with are well-rehearsed and some of them are more compelling than others (aesthetics, for instance, makes sense to me). The reasons she might not pass that surname, if retained, onto her own children are less so. The two, however, are not unrelated. How many female friends have wielded this justification at me for the initial decision: “But I want to have the same last name as my kids!”? It doesn’t take a master of logic to realize there exists another conceivable way to accomplish that goal. If the objective were simply a shared family identity, the men would be taking our names half the time.

Which, of course, they don’t. Such is the power of precedence. Female identity has been subsidiary to male identity from time immemorial. We are only now in the infancy of an effort to change that fact in a meaningful way. Not every woman wants to be a part of that effort. Not every woman thinks that replacing her last name with her husband’s is a contributing cause of its failure. I get that, I really do, even if I am not terribly sympathetic to it.

But what I don’t get is how even the women who choose to keep their last name on principle still give the children their husband’s last name automatically. It’s like feminism can stretch only so far before it snaps. We dig in our heels for the beginning of the race, but we can’t quite cross the finish line with the next generation. And whose ego is winning out there, if we are being honest? Which of us in this subset wouldn’t prefer, on balance, for our kids to have our own surname? The pride I felt during those first days in hospital with my newborns was undeniable, the days when their wristbands and bassinet labels still meant they were, in the eyes of the world, ‘Baby Apfel.’

If I harbor any hopes for my daughter in this respect, it is not only that she keep her name. It is that she believe her children should keep it too and that she finds someone to have those children with who is enlightened enough to agree with her. My hope for my sons is that they grow up to be so enlightened. 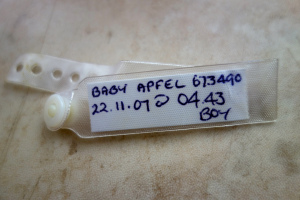 A different version of this piece appears at The Guardian.