what my twins taught me about gender stereotypes

I have girl/boy twins.

Aside from discrepancies in their sleeping and eating habits, they were treated virtually the same for the first year of their lives. Yes, we had blue and pink blankets, onesies swirled with flowers and onesies peppered with firetrucks, but such is the reality of the day-to-day with twins that, as babies, they often wore whatever was to hand. They dipped in and out of a common collection of age-appropriate toys. They ate and drank from a shared set of crockery, the designs of which were both traditionally feminine and traditionally masculine. They were read the same books; they were spoken to and praised in comparable ways.

And then, poof, somewhere around their first birthday, it was as if the gender fairy flitted into our house and waved her magic wand, dusting them both with stereotypes. All of a sudden, my girl twin started ferrying around the toy chest’s lone baby doll, tending to his manifold needs as much as her rudimentary coordination would allow. At the same time, my boy twin became absolutely obsessed with smartphones. He keyed in numbers and toggled buttons with gusto. He had a strange reverence for wires and the act of charging.

Here they were, at 1 year old, poster children for the power of nature over nurture when it comes to typical gender play. The writing, it would seem, was on the wall.

You can read the rest of the essay here, at The Washington Post. 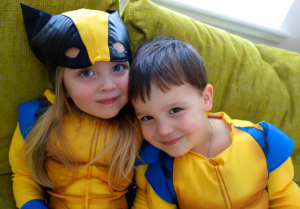