i let my kids play with toy guns

As you probably know, I have been doing ‘debates’ or pairings of essays on a single topic for a while now: it is one of my favorite sub-genres of parenting writing. To this end I was recently made Debate Editor at Brain, Child Magazine, which is very exciting! (You can learn a little more about my new role here.)

This month I lock horns with Zsofia McMullin about whether or not we should let our children play with toy guns.

Lauren writes: My first son’s gun infatuation peaked between the ages of six and seven, years when top birthday presents included the Elite Firestrike Blaster and the Dart Tag Sharp Shot. But, as with most phases of childhood and just as my mother predicted, he outgrew it. The box in his room that holds his Nerf collection is, quite literally, gathering dust. His younger brothers and sister dip in and out of it, but none of them is particularly interested. They are more likely to use the bullets to build castles or as fodder for their teddy bear picnics.

Zsofia writes: People argue that it wouldn’t be bad for my son to learn gun safety. He should learn so that he can be comfortable around guns, learn to use them safely, decide for himself how he feels about them when he is older. And to that I say: it’s okay not to be comfortable with certain things. There are many, many things in life he will probably not learn—flying an airplane, butchering a cow, cliff diving— and that’s fine. He will have a full, satisfying life without those things. I want him to feel very uncomfortable around guns so that when and if he ever sees a real one, he will run as fast and as far as he can. That is pretty much the only thing I tell him about guns.

Read the rest of the debate here, at Brain, Child Magazine. 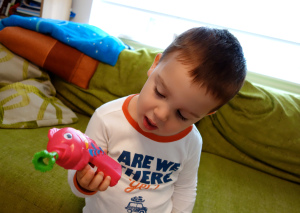