a tale of two toddlers

All toddlers are crazy, but they aren’t all crazy in the same way (to paraphrase Tolstoy). I was at a friend’s house recently, thumbing through a book I would never otherwise have seen, and I came across a schema that basically told you what kind of crazy you could call your two year old. This pleased me to no end. First because I love schema. And secondly because I love it when somebody else carefully categorizes what I have managed only to observe unsystematically.

The book - La Leche League’s Mothering Multiples - outlines three distinct types of toddler, using a travel metaphor (you know how much I adore these): the sightseer, the wanderer and the trailblazer. It’s not rocket science, to be sure, but as I read it I suddenly saw so clearly the difference between my own twins, a difference I live the truth of on a daily basis.

Twins are particularly eye-opening, of course, when it comes to the idea of innate personality differences for a whole host of reasons. One of which is that our memory tends to fade - not to mention warp - between children in a way that is impossible when the children are existing, at the exact same age, side by side. My first two sons are chalk and cheese, as we say in the UK, but their idiosyncrasies as toddlers weren’t as stark to me coming consecutively. Nor did they feel so overwhelming.

I remember those six months Oliver refused to put his coat on without a wrestling match and the same six months Leo refused to go anywhere without clutching a Wiggles DVD in his hot little hand. I remember that Oliver was a preternaturally neat eater, except with yogurt which he would smear across the tray of his highchair in a frenzy that bordered on the demonic. I remember when Leo could not eat a meal without standing up and sitting down and standing up and sitting down. These memories, though, are only icebergs in a sea of years. The precise timeline of the events, the details of my own emotional response, the tacks taken successfully or not remain, for the most part, under water.

Phoebe is a sightseer, through and through. These kids are observers by nature. They are routine-oriented and thrive on predictability: if it’s bath time, you need only say it once and up the stairs she marches, cooing for her rubber ducky. Sightseers are content to stick with the program, in this way, and by your side to boot. As a result, they take direction well because they don’t like anything that threatens their sense of safety. They aim to please, preferring to walk with you rather than away from you. Sightseers have episodes of rebellion, don’t get me wrong, but they are few and far between. When Phoebe doesn’t listen to me, I almost want to applaud her for summoning the gall.

When Jasper doesn’t listen to me, I want to tear my hair out. Because it happens over and over and over again. Don’t touch the TV, Jasper, don’t throw your food. It’s time for your bath, Jasper, yes it really is, we’ve only been having a bath at 7pm for 700 days in a row now. He is a wanderer, this boy, in mind and in body. I read the description of the wanderer twice over - the vaguest of the group by virtue of occupying a middle ground - to confirm where the line is drawn between this type and the trailblazer. To see if perhaps Jasper would have been a trailblazer in another life, had he been a singleton or a first or second child. He doesn’t have the frenetically high energy level, though, or the brazenness either. And thank goodness for that.

Wanderers, well, they wander. They aren’t forging new paths per se or bristling against every attempt at restraint the way their trailblazing counterparts do, but they aren’t necessarily cleaving to the ones you’ve carved out for them. Unlike the sightseer who has a focus that belies her age, the wanderer is distractible. He has the potential to concentrate, if a particular toy or game captures his fancy, but he is more likely to flit from one thing to the next. He is the child who will ‘forget’ the schedule, no matter how many times it has been laid down. He is adventurous and inquisitive, but not overly so. He will follow the rules, but only sometimes.

When you put the two types together - oh the joy of twins! - the results are interesting. The sightseer can inspire the wanderer to engage in longer periods of sustained activity. The wanderer can inspire the sightseer to leave her comfort zone. But the wanderer can also disrupt the meticulously designed world order of the sightseer and take glee in doing it: how many times a day does Jasper snatch one item, just one, from Phoebe’s perfectly arranged teddy bear picnic, sending her into a fit of hysteria? So too the sightseer, often rigid and exacting, can seek to control the wanderer and quash his spirit: how many times a day does Phoebe take on the mantle of parental responsibility, chastizing her brother (no, Japsie, no!) for some wrongdoing or other and causing him to lash out at her in return?

As with any two siblings, there is much negotiating to be done.

And yet, I find the travel metaphor especially apt for twins because they tend to walk, or be walked, a lot. Usually out of necessity. With two babies and one caregiver, the pram (or stroller) becomes quite literally a second pair of hands, a way to settle them both at the same time. When they were very small, I used to push my twins at least once a day through the streets and parks near our house, through whatever the uncooperative Scottish weather would throw at us. And now that they are older, they walk themselves through these same places. Phoebe right beside me, more often than not holding my hand. Jasper some stretch of distance away from us, having stopped to pick up a flower. 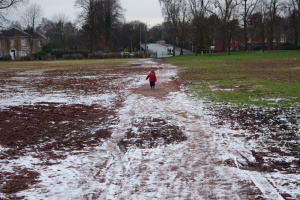 my little wanderer, always a few steps behind

Tagged as disciplining toddlers, multiples, toddler energy level, toddler response to discipline, toddlers, twins, what type of toddler do you have?

I love this expression - perhaps I should say ‘diagnosis’ - because it captures so evocatively the difficulty of a particular phase of childhood. It’s not a syndrome in the technical sense of the word, obviously, more a kind of tongue-in-cheek shorthand for a psychological phenomenon. Trust me, though: my first son suffered from it and it felt very real indeed. From about 10 months to 2.5 years old, this kid could not stomach a broken biscuit, literally or figuratively.

You know the scene. The biscuit comes out of the box in pieces or apart in the artless hands of the child trying to eat it and the shit hits the fan. Hard. I have a friend whose wife called him up from the local Starbucks, screeching into the phone for him to come immediately, the pitch of hysteria in the background so high he couldn’t help but think there was grave bodily harm involved. He arrived, out of breath and in a panic, to find that the only injury sustained was to a recently purchased cookie. Horror of all horrors: it had broken. And on the floor next to it, flailing, was his 23 month old daughter.

I have seen ‘broken biscuit syndrome’ explained in two different ways. One explanation is that the biscuit becomes the straw that breaks the camel’s back. A toddler’s life is about making sense of a world that doesn’t always make sense. So many rules to master, so many conventions to internalize and all of them conveyed with an inevitable degree of inconsistency. ‘No’s run legion, lines are drawn - sometimes arbitrarily, sometimes not - and these little people just do not have the emotional wherewithal to handle every setback that comes their way. They can cope with the first thing on a given day that falls to pieces, but not necessarily the last. This is the biscuit. It represents one upset too many.

This explanation has merit as a description of the general way in which small children struggle for control over their environment. But it doesn’t explain the significance of the biscuit itself. Not every kid goes crazy when the cookie crumbles. I realized this one day when I found my second son, no more than 14 months old, hunched purposefully in the corner of the kitchen. He had found an old cookie on the floor, which somebody must have stepped on, and was rhythmically shoveling the pulverized pieces into his mouth. He didn’t care how many parts it came in so long as they all ended up in his tummy. Other things sent this boy over the edge, fair enough, but never, not once, the lack of a perfect circle.

Which leads me to believe that there is something about the idea of wholeness that matters to some children and not to others. This is the second explanation. I read about it once, of course I can’t remember where now, and it makes perfect sense of the difference between son number one and son number two. The first was a worshipper at the altar of order. From the time he was old enough to move on his own steam, his play consisted of the systematic organization of everything that crossed his path. He was repetitive, he was fastidious, he liked the world around him to be just so. And when it wasn’t, as it isn’t some of the time, he lost it. The broken biscuit was, for him, the ultimate indignity. My second son, on the other hand, was far more resilient and flexible at that age. If anything, he seemed to thrive on disorder. Give him a breadstick in two bits and he would play the drums with them, not burst into tears.

Broken biscuit syndrome is no fun for the kid, to be sure. It might be indicative of certain personality traits that will follow him into adulthood or it might simply be a blip in his development that will fade away as he acquires a larger armory of coping skills. The person it affects the most while it is happening, rather, is the parent. Not because he or she has to spend a period of time riding out the storms of a toddler’s rage, though there is definitely that. But because it is an early - and powerful - symbol of the reality that there are some things in your child’s life that you simply cannot fix. Cookies, both real and metaphorical, will continue to break for him and you will not be able to put them back together. Such is their nature. All you can do is hope that the kid learns to pick up the pieces for himself. 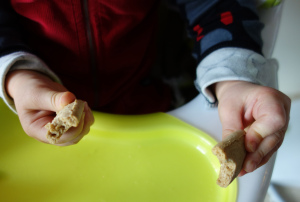 not whole? not a problem…for some kids