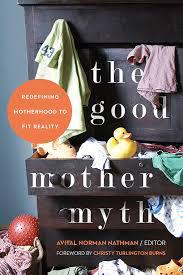 No, silly, not me. It’s the name of a book by Ayelet Waldman, which my sister forced me to buy. Get it now, she barked, over and over again until it finally found its way into my virtual shopping basket some months later. She was right, though. It was a must-read for me and I have already gifted it not for the last time. The premise is one we are painstakingly familiar with these days: the pressure to be perfect, internal or otherwise, is an inescapable feature of modern motherhood. It is why we invest every decision about our children’s upbringing with mystical properties. And it is why we drive ourselves crazy at the prospect of making a wrong one somewhere along the way.

The antidote to the madness is honesty. Waldman saw this clearly (she is, after all, best known for her admission that she loves her husband more than her children). Telling it like it is and drawing conclusions accordingly is the modus operandi of the entire collection of essays. Honesty makes for a great story too: the bad mother is the better to paint in excruciating detail, the colors of her lapses and misjudgments are vivid indeed. The good mother, on the other hand, is a chimera. She is a product of our imagination or what we mistakenly or incompletely perceive in other women and nobody wants to hear about her.

Honesty is so important because it makes bad mothers of us all, on occasion. You can’t tell the truth about what it is like to deal with kids hour in and hour out without saying something condemning about yourself. Parenthood is roses and rainbows some of the time, but the rest of the time it is anything but: thoughts can be dark, patience can be wafer-thin, poop can get everywhere. It is a mixed bag, like everything else, and it is a series of phases. You think you are a faultless mother to your pristine baby? Well, let’s see what happens when the terrible twos or the trying threes or the fuck-you fours come crashing down on your head.

There are a lot of moms out there today chipping away at the straw man (or straw woman, I should say) of the good mother. And many of them, like Waldman, have taken to their computers. The web is saturated right now with mommy blogs: women trying to make sense through prose of their experience raising children and to educate and be educated about the different ways it can be done. Because parenting is both highly specific and profoundly universal, it lends itself to a conversation of just this sort. We all do basically the same things - feed the kid, put him to sleep, discipline him, pack him off to school - but we do them in such wildly distinct ways that we can’t help but take interest in how the next mother over is doing it. Or at least I can’t.

The dichotomy between the universal and the particular is what led me to omnimom. The Latin word ‘omnis’ means ‘all’, but it also means ‘every’. The gist is that every mom out there has a unique take on what it is to be a ‘good’ one. The ways to be a good mother are as diverse, almost, as mothers themselves. Unless you are utterly neglecting your kid or abusing him or worse - there is obviously a threshold but, let’s be honest, nobody reading this blog falls beneath it - you should wear the title proudly. The problem with the current climate of middle-class parenting - and the anxiety it propagates as a result - is that it presupposes only one right answer or set of right answers to the question: how do I do it well? We are led to believe that if we argue long enough about it, marshal enough evidence, read enough books, we can put our finger on how to parent perfectly.

I have spent much of my academic life studying the idea of pluralism, which argues precisely the opposite. It is a moral philosophy, but it speaks beautifully to motherhood. Pluralism is the belief that there are many, many goods or values in this world and that they can be so different from one another that they might even become mutually exclusive. When this happens - when breastfeeding comes into conflict with bottle feeding, sleep-training with co-sleeping, staying at home with being a working mom - the most we can do is make an all-things-considered, best-case-scenario choice between them, based on individual preferences and goals. It’s not a wonder, then, that we all choose differently.

omnimom originated because I chose differently with each of my kids. I learned the lesson of parenting pluralism without having to leave the house. It is often the case that we walk the same roads from one child to the next because the footprints are already there: breastfeed one, breastfeed them all; C-section with one, C-section with them all; attachment parent one, attachment parent them all. But circumstances, particularly the fact of having twins, has sent me down roads I would never have expected to travel. One’s perspective can’t help but broaden.

Having four kids is an eye-opener, in this way. The number doesn’t make you a good mother. If anything, you become a conventionally worse one as the repetitiveness greys your hair and dulls your resolve. But it can make you a more circumspect one: the years, and the variety of your offspring, often prove that the ‘wrong’ decisions you thought you made with one of them or two of them vis-a-vis the others don’t matter a jot and that, sometimes, they worked out better than you could have guessed.

Waldman has a chapter towards the end of the book, it’s my favorite, called ‘To Each His Own Mother’ where she makes roughly the same point: you don’t parent your fourth kid the same way you parent your first. How can you when the experience of what went in-between has literally made you a different person? But that doesn’t make your first child’s mother the good one because she was able to cater to his every whim or serve him only hand-crafted organic food or mark his every milestone in a journal bought specially for the purpose. And it doesn’t make your last child’s mother a bad one because she did none of those things. Rather, as Waldman concludes herself, it is impossible to say in hindsight which kid got the better deal. And it probably doesn’t matter anyway.